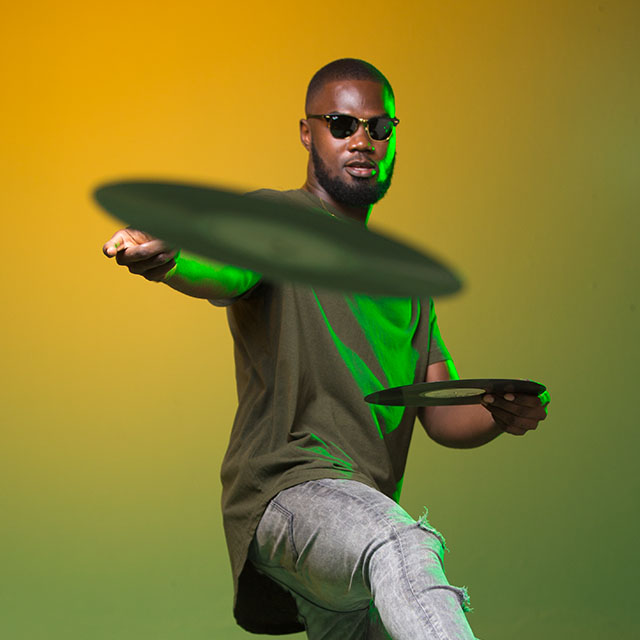 People’s champ A.D DJ is a young and hardworking radio, club and event DJ. Known for always getting the work done and making his audience crown him a champion behind the decks.

Also know by others as Adom Samuel Opoku, has always been involved with music and was no surprise when he decided to be a DJ. In his primary school days through to his secondary school days, he was always where the music was. His deejay career started during the last few months in this senior high school, St Augustine’s College in Cape Coast. Following completion, he entered the University of Ghana and read Psychology and Adult education. He somehow managed to school and pursue his DJ career together.

In 2014, he participated in the first edition of the YFM campus DJ competition won and as his reward, got a seat with the big DJs like Killer Fingers, DJ Mic Smith Vision and others on the station. A.D DJ has been very instrumental and has been with YFM to date, mainly playing on the Y Campus Express show initially with host Joel Orleans and Later Rev Erskine, Urban Africana with Official Kwame and the MMRS with the RavinKingz.

As a campus DJ, A.D DJ played for most top campus events be it Hall weeks, Club Parties, House parties and even drink Ups. He also organized annual club parties, which added to his fame as one of the top campus DJs if not only during his time.  He has nominated for a lot of campus awards and other nationwide ones too.

His nightlife has been no different, even before radio A.D DJ was involved with clubs like Club 45 and Friday friend. In 2015 he played at the Famous Berla Roma nightclub alongside DJ Kess on Fridays. Between 2015 and 2016 he featured in almost all the top clubs in Accra and annually being invited to Kumasi to play for top club events during the Repu hall weeks in KNUST. Currently, he plays at Plot 7 Night Club on Fridays alongside FrenchKiss DJ.

Over the years, A.D DJ has made waves with his mixes. He released the “I LOVE COLLEGE” mix, which was geared towards promoting young, good and underground artists on campus. In 2017 he came up with “RAVINKINGZ” mix with he dropped monthly

In early 2017, People’s champ A.D DJ featured on Stonebwoy’s Nationwide Campus tour as his main DJ on their trips to Umat in Tarkwa, UCC in Cape, GIMPA and others, where he performed phenomenally and won the hearts of everyone on the BHIM Nation team.

He is currently aiming at becoming a household know and brand and moving into the production of music in a few years to come.