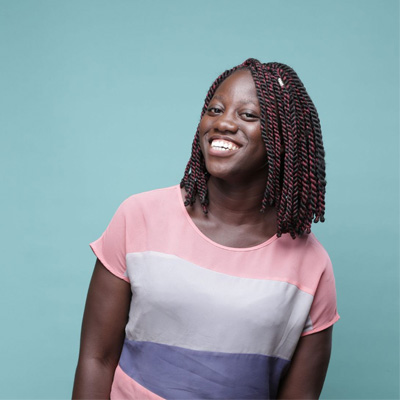 Ella Okunmwendia is a radio and television content producer, a journalist, a podcaster, and a sports presenter. She is a multilinguist, fluent in English and French with basic proficiency in Korean and Spanish.

As a television producer, she has worked with Agency Ephat Media as a producer on Joy Prime’s morning show, Prime Morning, hosted by Jay Foley. Ella also worked as the assistant producer of the “Love Is” show by 12.28 Inc Productions.

Ella began her radio career at 17, in her first year at the University of Ghana. She was recruited as a newscaster for Radio Univers’ French Show “Rendez-Vous Avec La France” after she impressed the producer with her reading. She later became the producer and host of the show.

She officially joined Radio Univers in May 2015 and was assigned to the Sports Desk, a field she had limited knowledge. After months of training, Ella became the first female Assistant Sports Editor at Radio Universe and boasts of being the first sports journalist in Ghana to report on Bobsled and Skeleton. Also, the first lady to announce at a Taekwondo event in Ghana; the Ghana Open Taekwondo Championship.

After 2 years with Radio Univers, she joined Ghana’s Number one Urban Station as a Sports presenter before producing the MydMorning Radio Show with Trigmatic and Dj Ganj.

Also referred to as the Super Producer, Ella has worked on various shows and on-air personalities at YFM. From 2018, Ella was in charge of The DrYve with Joel Orleans, DJ Mic Smith, and current host Kojo Manuel.  She also worked on the YLounge with Akosua Hanson and DJ Kess in 2020.

Currently, she works with Brown Berry and DJ Loft on RyseNShyne, Rev Erskine and DJ Ganj on The MydMorning Radio; Winston Micheals on Pop Central and Mark DeForce on the All-Abroad Show.

She is a podcaster and creator with Envi Media, a multimedia pop culture platform with an emphasis on K-pop and a sweet spot for K-pop group NCT.