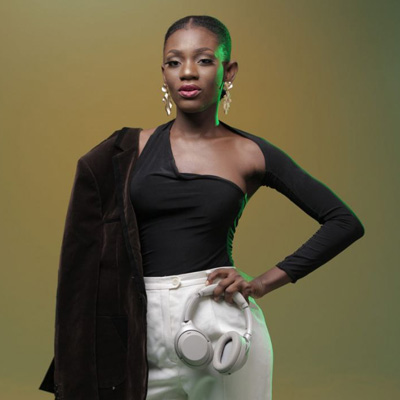 Mz Orstin is the official DJ for the Weekend Rush and the  Y top 20countdown show on Sundays YFM. She is also the resident Friday night DJ at AM & PM Lounge, and the on-deck DJ for Vodafone’s staff internet radio on Friday’s (2 pm – 5 pm) on RedFM.

From humble beginnings, she began working under DJ Armani in the year 2012. Mz Orstin rose to prominence in the dynamic field by pioneering and organizing her night, “Bella Roma Wednesday nights,” seven months into her burgeoning career, which was the first-ever Wednesday club night in Ghana.

Mz Orstin has since had the privilege to work in numerous premium bars and lounges across the country. She has also been featured in many events, such as the ‘Rexona do more concert 2014”, playing as a guest DJ at the Ghana Music Awards 2017, Girl talk concert 2016 & 2017, Miss Malaika 2017 & 2018, etc.

Mz Orstin is a major force to be reckoned with within the industry, illustrated by the many nominations at the Ghana DJ Awards shows over the years.

She is an avid advocate for female empowerment and the induction of more female DJs into the industry. She launched her concert, the Live Jam with Mz. Orstin, an all-female performer event that involved fusion between DJ play and live instrumentals.
Her scope of experience in the industry thus far has built her skill, professionalism, and versatility in the business, while allowing her to showcase her talent in various musical genres.

Mz Orstin, deeply drawn to music and dance, chose to make these love her career and has been successful in growing her image and brand, as one of the best disk jockeys in Ghana.