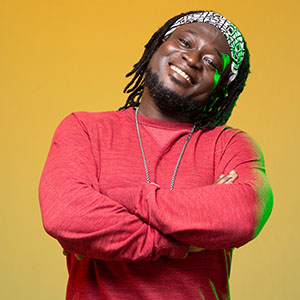 Nockus had his Secondary School education at St Peter’s Secondary School, for his Ordinary level, and headed to Adisadel College for Advanced level. After a year of National service, he entered the Kwame Nkrumah University of Science and Technology where he studied Publishing and majored in Design and Illustration.

Nana Kwame found his inspiration for radio in 1997 when he entered KNUST and found out that his hall of residence, Katanga hall, had a radio station, COTTANTO Radio. In 2008, he was contacted by Global Media Alliance to take part in a brainstorming session that led to the birth of Ghana’s first and biggest urban radio station, YFM.

Aside from his managerial role at YFM, Da Soulman was the voice behind the drivetime show, “The DrYve of Your Lyfe” until 2014. Currently, he is the host of the “Friday Night Mix” which airs every Friday from 8 PM to 12 AM. Nockus also oversees the production of 3 nightlife shows including the 2018 Nightlife Radio Show of the Year, Midweek Madnezz.

Away from radio, Nana Kwame made his mark in television as host of TV3’s “Ruff Cut” in 2006 for about 6 months. He had to quit the show to represent Ghana in MNET’s Survivor Africa Panama. In addition, Nockus was a fill-in presenter for ETV’s Late Night Celebrity Show.

With his passion for music and arts, Da Soulman has entertained crowds as an MC in most of the Clubs in Accra but has officially worked with Boomerang, Vanity, Aphrodisiac, and Club11. He has also made an appearance in a few movies with Shirley Frimpong Manso’s Sparrow productions including the multiple award-winning Perfect Picture.

Known for unveiling new talents, Nockus has, for the past 15 years, been involved with Lyricist lounge, Bless The Mic, and The Movement, events that gave life to the careers of a lot of the big names in music. He also worked directly with individuals and managements that started the careers of artists such as Jupitar, AI now Ayisi, King Promise, Kuvie, Lady Jay, and Yaa Pono among others.