by yghanadmin
in News, Sports
0 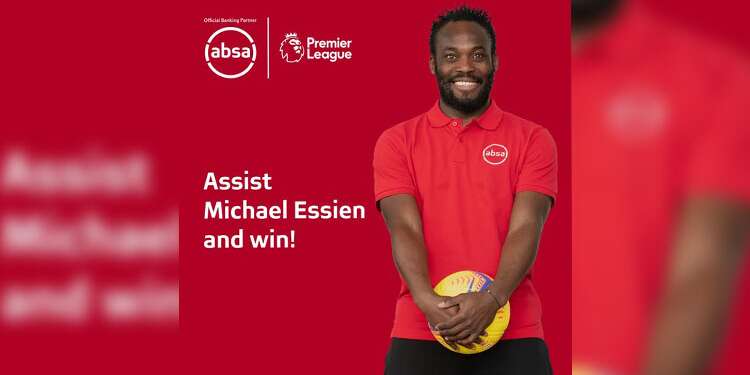 0
SHARES
16
VIEWS
Share on FacebookShare on TwitterShare on Whatsapp
The new English Premier League season is here. Already, the heat is building up with the big teams finding their spots on the league log. Long way to go right? As we wait for more surprises, Absa has announced a pan-African reward campaign with English Premier League Legend and former Black Stars midfielder, Michael Essien, to connect Ghanaians to the game they are most passionate and excited about. Known as the Absa Ultimate Assist, the campaign is aimed at engaging customers and potential customers with light-hearted Premier League content and rewarding them with exciting prizes. The campaign which has a social media challenge “Give Michael Essien The Ultimate Assist” encourages Ghanaians to participate by demonstrating their skills to win a special package. To participate, you must take the following steps: Read also: Absa Group Reports Increased Earnings on Broad-based Recovery Commenting on the campaign, Benjamin Dwummah-Adu, Marketing Manager at Absa Bank Ghana said beyond connecting people’s dreams to the financial solutions, services, and opportunities, Absa is also committed to connecting the Ghanaians to things they love.   “Football is a game that excites, thrills, stirs up hope, and sometimes disappoints but always unites us. It’s a game that thrives on assisting each other to win. Through the Absa Ultimate Assist, we are demonstrating our commitment to supporting Ghanaians with financial solutions to get things done as well as connecting their passion to the beautiful game.” In a Twitter post on the campaign, Michael Essien wrote “I am excited to be partnering with Absa, the Official African Banking Partner of the Premier League, on their #AbsaAssist campaign. Keep a lookout for exciting content coming to you this season.” During his time at the English premiership, Michael Essien helped Chelsea to win the Premier League in 2006 and 2010, as well as three FA Cups and one League Cup. He won the UEFA Champions League in 2012. He has won the Chelsea Goal of the Season award twice, in the 2006-2007 and 2008–2009 seasons. Absa Bank has been a long-standing banking partner of the English Premier League.
Previous Post