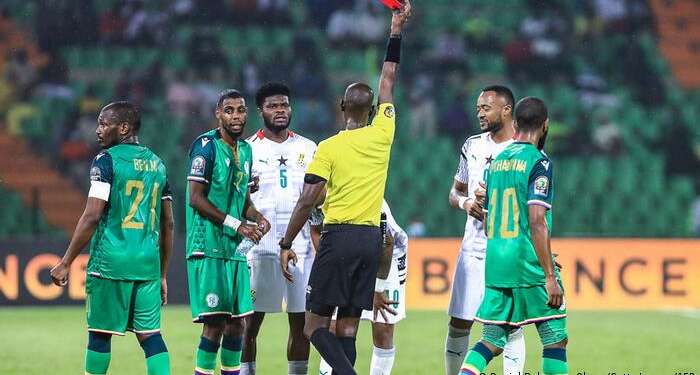 #AfconHub2021: Black Stars bow out of AFCON after 3-2 awkward defeat to Comoros

Ghana existed the 2021 Africa Cup of Nations in Cameroon after a humbling 3-2 defeat against debutants Comoros in the final game of the group stages.

The Black Stars were taken by surprise as Comoros drew the first blood in the game with
Ben Nabouhane’s strike in the fourth minute.

The hope for a qualification was ruined after the captain of the Stars, Andrew Ayew was red carded. Ayew went after a loose ball after a save from Comoros’ goalkeeper, Ben Boina which resulted in an unfortunate tackle.

Ben Boina was injured and being treated when the referee of the game appraised the decision of a red card upon the intervention of VAR.

Coach Milovan decided change the dynamics of the formation as he replaced Baba Rahman with Edmund Addo. Thereafter, Comoros doubled the lead courtesy Ahmed Mogni strike from outside the box.

The Black Stars dominated the entire second half as Richmond Boakye-Yiadom scored a header from Kofi Kyereh’s corner kick.
Moments later, Ghana was leveled again from the corner kick from Kyere. However, this time Thomas Partey flicked the ball over his head as Djiku tapped the ball into the net.

Coach Milo again decided to chase for all three points and brought in both Joseph Paintsil and Samuel Owusu to join the attack. While Ghana was short at the defense, Mogni recorded his brace from close range from a counter-attack and sealed all maximum points for Comoros.

This is the first time the Black Stars of Ghana have exited the group stage of the tournament without recoding a win since 2006.

#AFCONonY: Without a ‘cup’ what’s the use of Milo? – Shatta Wale joins Ghanaians to bash coach Milovan

#AFCONonY: D-Black launches online petition for the return of Asamoah Gyan to the Black Stars

#AFCONonY: D-Black launches online petition for the return of Asamoah Gyan to the Black Stars