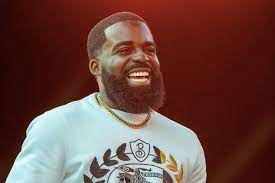 0
SHARES
43
VIEWS
Share on FacebookShare on TwitterShare on Whatsapp

Ivorian afro-beats act, Afro B, has disclosed that he is about to release the fourth of his Afrowave series this year.

Afro B who doubles as a Disc Joker made this announcement in an interview with Kula during the ‘Wake N Bake’ show on Y 107.9 FM. He also mentioned some African artistes that featured on the ‘Afrowave 4’ album.

“So, I have got an album coming up. The album features top artistes in Africa including Ghana’s Stonebwoy, Efya, Oxlade, Ycee to mention a few,” he said.

Afro B further noted that he is looking forward to release his anticipated album in the next few months.
I’m aiming for April or May, but it might be May and might be April too.”

Speaking to the success for his hit afro-beats single ‘Drogba(Joanna)’ he noted “It has been a serious blessing, the song is opening doors for the scenes in America. So, I want to continue breaking barriers for African music worldwide.”

Afro B is currently in Ghana to promote his music as well as himself as an entertainer and create friendly relations with some entertainment industry players.