by digital_yfmadmin
in Exclusive Interviews
0 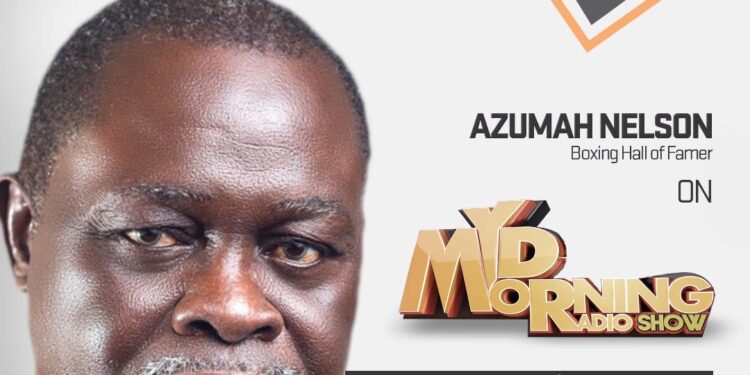 Ghana’s number one youth-oriented radio station, Y FM, will be hosting boxing legend, Azumah Nelson on the Y Leaderboard Series.
The interview which is scheduled for 2nd June 2020 will see YFM’s Rev. Erskine engage the boxing legend in a fascinating interview that will inspire the youth who want to make an impact in the society.
Azumah Nelson is a former Ghanaian professional boxer who has gained international recognition for his many feats in the boxing arena. His career in professional boxing began in 1979. His first fight abroad was in 1981 with Bozzou Aziza in Togo where he beat his opponent. This was then followed by his first United States fight in California where he won the fight against Miguel Ruiz.
He added the Commonwealth of Nations’ featherweight title with a fifth-round knockout of Brian Roberts. He went on to win the World Boxing Council (WBC) featherweight title once and the World Boxing Council (WBC) Super featherweight title twice.
He made his first global appearance in a world title fight when he challenged WBC featherweight champion, Salvador Sánchez, in 1982, a fight he lost by a technical knockout in round 15.
In his professional boxing records, he has had about 39 wins, 6 defeats and 2 draws.
Azumah Nelson is known in the boxing circles as ‘The Professor’ because of his craft and power in humbling his boxing opponents in the ring.
Programmes Manager for YFM explained why Azumah Nelson is the next on Y Leaderboard series when he says: “Y FM believes in dynamism. We have brought our listeners personalities in politics, entertainment and education. It is now time to draw some inspiration from the sports sector. Azumah Nelson is a legend. From humble beginnings to being recognized around the globe; there is no doubt that he will share with us some tips we can harness to make it to the top. Make a date with this legend on the Y Leaderboard series this week for an interactive and educative session”.
The ‘Y Leaderboard Series’ is a new segment of the ‘Myd Morning Radio Show’ which focuses on providing a platform to the young generation of Ghanaians who want to break out of the rat race, venture into entrepreneurship and take up leadership positions.
For more updates, visit www.yfmghana.com
Follow us on Twitter: @y1079fm
Follow us on Instagram:@1079fm
Like our Facebook page: Facebook.com/Y1079fm

Video: If your ex remains friends with you, he just wants to have sex-Kamasutra Queen

Video: If your ex remains friends with you, he just wants to have sex-Kamasutra Queen