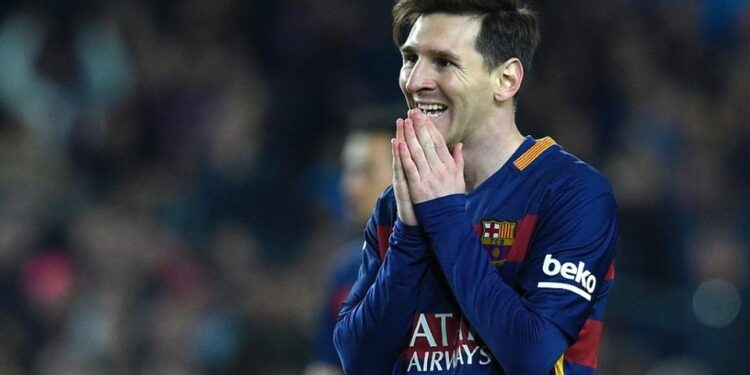 Barcelona star Lionel Messi will appeal and has vowed to clear his name after a court in Spain on Wednesday sentenced him and his father to 21 months in jail for tax fraud.
The prison sentences are likely to be suspended as is common in Spain for first offences for non-violent crimes carrying a sentence of less than two years.
The Argentine’s lawyers feel an appeal would eventually succeed in persuading the court that Messi and his father have behaved correctly, the player’s representatives told AFP in a statement.
“The most recent laws from the supreme court on the matter that concerns us would seem to prove the argument of the defence,” Messi’s lawyers Enrique Bacigalupo and Javier Sanchez-Vera asserted.
On Wednesday, the Barcelona court had found the Argentina international and his father Jorge Horacio Messi guilty of using companies in Belize, Britain, Switzerland and Uruguay to avoid paying taxes on 4.16 million euros of Messi’s income earned from his image rights from 2007-09.
The income related to Messi’s image rights that was allegedly hidden includes endorsement deals with Danone, Adidas, Pepsi-Cola, Procter & Gamble and the Kuwait Food Company.
The court found Messi and his father, who has managed his son’s affairs since he was a child, guilty of tax fraud and ruled that for each of those three years they should serve a sentence of seven months.
Messi, 29, a five-time world player of the year winner, was also fined 2.09 million euros while his father was fined 1.6 million euros.
They can appeal the decision to Spain’s Supreme Court and that is what the pair’s lawyers indicated on Wednesday they would, saying they felt confident an appeal would succeed.
Messi told the court during the four-day trial that wrapped up on June 4 that he trusted his father with his finances and “knew nothing” about how his wealth was managed.
Prosecutors had asked for Messi to be absolved, arguing there was no evidence that the player was aware of how his income was managed.
The state attorney representing tax authorities in the trial, Mario Maza, said he found it unlikely that Messi knew nothing about the situation.
“There is no deliberate ignorance here, it’s fraud and that’s all there is to it, because he didn’t want to pay his taxes,” he said.
“It’s like a crime boss. At the very top is the bigwig who doesn’t want to know about the details.”
The court agreed, arguing in its ruling that Messi “had decided to remain in ignorance”.
“Despite all the opportunities available to the player to show interest in how his rights were managed, he did not,” the court added.
The court said if the player was not punished, “ordinary” citizens could conclude that it was better to “not show interest” in their tax obligations.
Messi’s tax fraud trial has taken place against a backdrop of simmering voter anger over steep cuts to health and social spending, as the government struggles to bring Spain’s public deficit down.
Barca stands by player
The player and his father made a voluntary payment of 5.0 million euros — equal to the amount of the alleged unpaid taxes plus interest — in August 2013 after being formally investigated.
After the court delivered its verdict, Barcelona issued a statement “giving all its support to Leo Messi and his father”.
“The club, in agreement with the government prosecution service, considers that the player, who has corrected his position with the Spanish tax office, is in no way criminally responsible with regards to the facts underlined in this case,” it added.
Messi is Barcelona’s all-time leading goalscorer.

My comment on Komla Dumor taken out of context — Nana Konadu