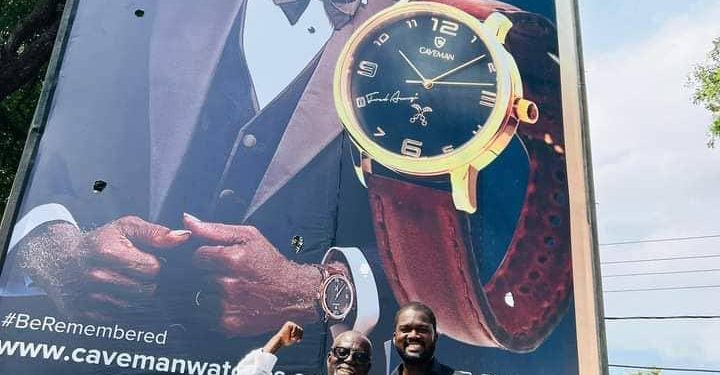 The 74th birthday wish of renowned Ghanaian actor Fred Amugi to appear on a massive billboard before he passes away has now been fulfilled by the Ghanaian classic watch brand, Caveman Watches.

Earlier this year, Fred Amugi while celebrating his 74th birthday on November 5, 2022 wished himself a special aspiration he wanted to fulfil before his death.

In an interview the veteran Ghanaian actor also shared that wanted to earn brand ambassadorial deals and appeared on billboards.

He said that he wanted to live and see this wish come through before his maker called him someday because he didn’t want to pass away before he would be recognised in this way.

After the interview went viral, Fred Amugi and the Chief Executive Officer (CEO) of the Ghanaian-owned watch company Anthony Dzamefe met and appeared to be working on “deals” together.

Anthony posted a picture of their meeting in his office with the caption “Deals” on Instagram:

Eventually, the Caveman watch company, whose tagline is “Be Remembered,” fulfilled the dream of Ghana’s most celebrated actor.

The first billboard is up, and the contract is officially finalised. On Thursday, November 24, 2022, Fred Amugi was given a tour of the board by the honoree CEO and other members of his staff.

Soon after seeing the advertisement, the actor was astounded and could barely believe what his sight offered.

When he eventually saw the first billboard put up with his image plainly etched on it, he was so moved that he almost started crying.

Caveman Watches will indeed “Be Remembered” by Ghanaians for the priceless act of kindness!