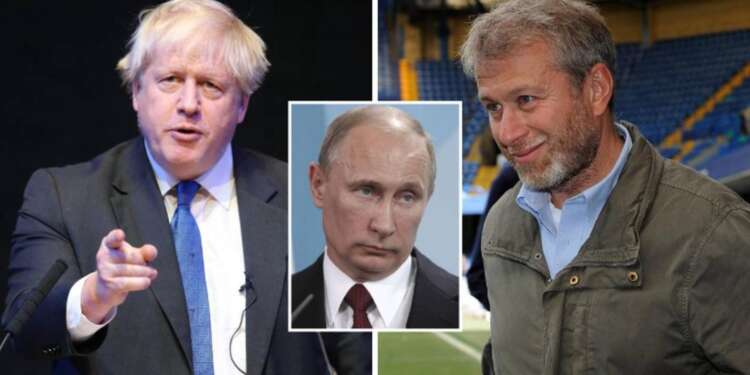 Analysts say other sponsors are likely to follow Three in the hope of avoiding ‘guilt by association’ with Abramovich, who officials say owes at least part of his £9.4billion fortune to his friendship with Vladimir Putin.

Other brands, including, Nike, which has a £55m kit deal with Chelsea, as well as car manufacturer, Hyundai, and the watchmaker, Hublot, which have deals worth over £15m combined, will also have to weigh up their next move.

Abramovich, whose tainted billions propelled Chelsea from mid-table mediocrity to five Premier League titles, has been banned from doing business in the UK – meaning his plan to sell the club is on hold.

However, ministers could still permit a sale as long as Abramovich does not benefit financially. In this case, it is likely any proceeds would be held in a dormant account until the sanctions expire.

A No10 spokesman said: ‘The government is open to a sale of the club, but that would require another licence and discussions with the Treasury and other departments. In no way could it benefit Roman Abramovich or the money find its way back to Russia.’

Chelsea’s status as a ‘significant cultural asset’ means it can continue playing, but Abramovich will be deprived of any profits.

The club has been banned from selling home and away tickets, with only fans who have already bought tickets – including 28,000 season ticket holders – still allowed to attend games.

There is also the prospect that Champions League games will be played effectively behind closed doors, as those tickets are often purchased separately from season tickets.

Chelsea’s temporary licence bans it from spending more than £20,000 on any away game travel, raising serious logistical questions for its Champions League game in Lille next Wednesday. They play Norwich away tonight and Newcastle at home on Sunday.

A source told Mailonline: ‘Stamford Bridge is not going to be empty … we don’t expect them to play behind closed doors. It does mean there may be some empty seats but not an empty ground.’

Chelsea will not be able to agree any new contracts, preventing it from engaging in the summer transfer market. Captain Cesar Azpilicueta and key central defenders Antonio Rudiger and Andreas Christensen could now leave for nothing when their contracts expire this summer.

Chelsea will continue to receive TV broadcast payments and provide food and drink at matches, and existing staff, stadium stewards and players will still be paid.

The club – which today marks its 117th birthday – cannot sell any merchandise itself, but retailers who already hold stock can continue to do so, as long as none of the money ends up in Chelsea’s hands.

The licence to continue operating will last until May 31, but can be ‘varied, revoked or suspended’ at any time. If the club were to end up in administration, they would receive a nine point penalty.

Culture Secretary Nadine Dorries said the aim of today’s measures was to ensure that Abramovich cannot ‘benefit from his ownership’.

The oligarch’s name was chanted by Chelsea fans during a minute’s applause for Ukraine at Burney on Saturday, leading to widespread condemnation.

Today’s news has left fans of the club reeling, with one declaring it ‘the end of Chelsea as we know it’ – while rivals mocked the club, saying ‘Stamford Bridge is falling down’.

Although the shape of Chelsea’s long-term future has naturally been thrown into doubt, but Government ministers were quick to insist any damage would be limited.