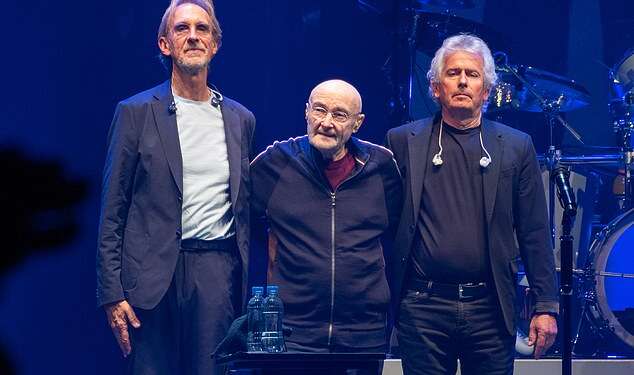 Phil Collins bade an emotional farewell to Genesis fans alongside bandmates Mike Rutherford and Tony Banks in London on Saturday – as the iconic band played their final ever concert.

London’s 02 provided the backdrop for the band’s last show on their The Last Domino? Tour – with frail frontman Phil, 71, telling the crowd he will now have to get a real job.

Phil, who performed the show sitting down due to suffering from a number of different health conditions in recent years, later joined Mike, 71, and Tony, 72 for a standing ovation.

The band first found fame in the 1970s and have sold more than 100million records.

Phil told the crowd ‘It’s the last stop of our tour, and it’s the last show for Genesis. After tonight we all have to get real jobs.’

The three London concerts were set to take place at the end of last year but had to be rescheduled due to positive Covid 19 tests within the band, which has been touring for the first time in 14 years,

Collins, who has a history with back problems, has been sitting down for all the concerts on the tour and his son, Nic Collins, 20, has stepped in for him on drums.

The 2007 Genesis reunion tour left Phil with a dislocated vertebra in his neck that caused nerve damage in his hands. He has been using a walking stick since he had major surgery on his back in October 2015.

In 2017 Phil was forced to postpone two solo concerts at the Royal Albert Hall after a fall in his hotel room.

Original member Peter Gabriel, 72, did not join the trio for this set of shows, and neither did guitarist Steve Hackett , 72, who was in the band from 1971-1977.

They released their debut LP – From Genesis To Revelation in 1969 – with John Silver replacing Chris on drums and percussion.

By the time of second album Trespass in 1970, John Mayhew was the drummer.

In 1970 Phil became the drummer and provided backing vocals before taking over lead vocals in 1975.

Mick Barnard also enjoyed a one-year stint in the band on guitar from 1970-71.

Since the band’s debut, they have gone on to sell more than 100 million records – securing 21 UK Top 40 hits and six Number One albums.

Before the tour – they last performed together in 2007 to mark their 40th anniversary and had been in two minds about reuniting due to Phil’s medical issues.