G-Money Evolves with ‘Be a Gee’ Campaign 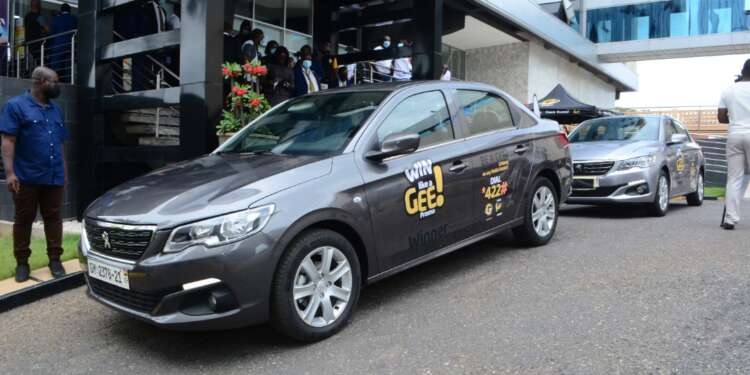 After close to two years in operation, GCB Bank has out doored the ‘Be a Gee’ campaign to attract new customers and reward existing customers for making transactions on the G-Money platform.

G-Money is a telecommunication agnostic service that allows customers to sign up and perform all mobile money transactions irrespective of their mobile network. G-Money’s affiliation with GCB Bank allows customers to enjoy better financial products and the safety and security of saving at a bank. Apart from its safety and convenience, G-money also offers very competitive rates on transactions.

Speaking at the campaign launch, the Deputy Managing Director-Operations of GCB Bank, Mr Emmanuel Odartey Lamptey expressed appreciation for the growing customer base;

“We are very pleased that our customers have acknowledged the value of G-Money products and services and are patronizing it. The growing customer base within a little over a year of its operations proves customers’ satisfaction and GCB’s commitment to offer the public not only bank-based financial services but also a more broad-based platform to serve other non-bank customers who may otherwise not have been able to transact through the banking system. This undergirds our commitment to provide financial inclusion for all sectors and segments of the economy, leveraging on technology to provide convenience speedily, securely and efficiently. Hence, the launch of this campaign”, he expressed.

Mr. Carl Ashie, the Head of Mobile Financial Services for GCB Bank shared the rationale behind the promo attached to the campaign;

“G-Money is also running a promotion to not only bring the brand to the attention of the Ghanaian populace but also to reward our committed and loyal customers using a transaction-based reward system. Customers are simply required to do more G-Money transactions and accumulate points. The first ten ‘points accumulators’ over a one-month period beginning from November 2021 to March 2022 will be rewarded for their financial activities”.

Mr. Ashie further shared details on how to participate and win in the promotion;

“You first have to sign up to G-Money and perform transactions with your existing accounts. The more you transact, the more you build points. The customers with the highest accumulated points will win prizes at the end of every month.”

After a successful launch in January 2020, G-Money, GCB Bank’s mobile money service, has registered close to two million subscribers to its service. This milestone, in under two years, shows strongly that G-Money is a force to be reckoned with in the mobile money services ecosystem.

G-Money was established as the mobile money arm of GCB on January 30th 2020. The brand is known for its services such as cash-in, cash-out, deposits, P2P transfer, airtime top-up, merchant payment, group services, voucher generation, among others. This service is an integral part of GCB Bank’s commitment to drive financial inclusion as part of its strategic objectives. The service is available nationwide with over 24,000 agents and 185 GCB branches. Being mindful of the possibility of fraud, a high level of security has been factored into agent point transactions where the short-code of the agent is inputted to ensure that the transaction is solely between the agent and the customer.

Additional information  – this speaks to why somebody should be a Gee

With this new campaign, all potential customers are being encouraged to sign on to the brand’s versatile platform to carry out all their financial transactions.

One can become a Gee simply by visiting any of G-Money’s over 24,900 Agents or GCB’s 185 branches nationwide. Being a Gee is one of the best decisions you can make as global transactions are moving from account-based to wallet based platforms by choice.

The brand’s services are currently being enjoyed by a wide category of customers including students, blue/white-collar employees, tertiary institutions, the police/military/immigration services institutions, farmers and many other people, to name but a few.

G-Money is all-networks compatible with the ability to make transfers to all banks. Customers enjoy a range of services including cash-in, cash-out, ATM card-less withdrawals, GhQR code services, voucher generation and many more. All G-Money customers will soon be able to enjoy other services including remittances, micro-loans and card-related products with many more which will soon be implemented for the patronage of all ‘Gees”.

Do not take yourself out.

Join the bandwagon – Be a Gee and Twa Tum! You will never regret you did.