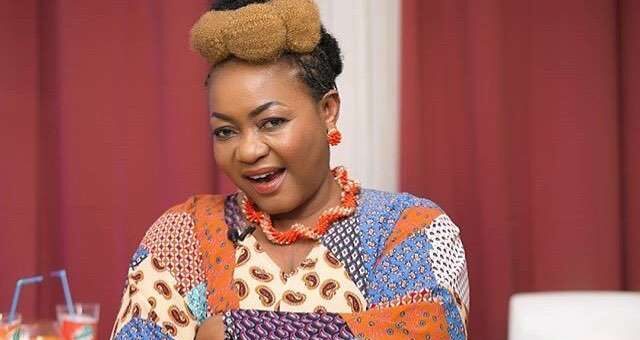 Ghanaian actress, Christiana Awuni has stated that Ghanaians are experts in fabricating lies and it is very difficult distinguishing truth from lies these days.
In an interview with Zion Felix on the May Day edition of the Ayekoo After Drive on Happy FM, the Kumawood actress shared her experience following the demise of popular kumawood actor Bernard Nyarko.
According to the actress , she was overwhelmed with grief and pain over the accusations levelled against her with regards to the demise of the late Bernard Nyarko.
“Following the death of the late Bishop Bernard Nyarko, news kept on popping on social media insinuating that I had a hand in his demise. Infact, I was devastated. I was pained at how petty some Ghanaians could be.”
Although she was distraught by the accusations levelled against her, the Kumawood actress revealed that her faith in God that all things would work out for her good inspired her to hold her peace till the matter died down.
” I held my peace through all the accusations and trolling from social media because I believed I would be vindicated by God eventually. You see at times, the best way to respond to certain allegations and negative comments about you is to keep silent. You will only worsen your case when you react hastily in anger.”
By Belinda Baaba Baidoo

GAA yet to receive $9,000 from GOC- Charles Osei Assibey

GAA yet to receive $9,000 from GOC- Charles Osei Assibey