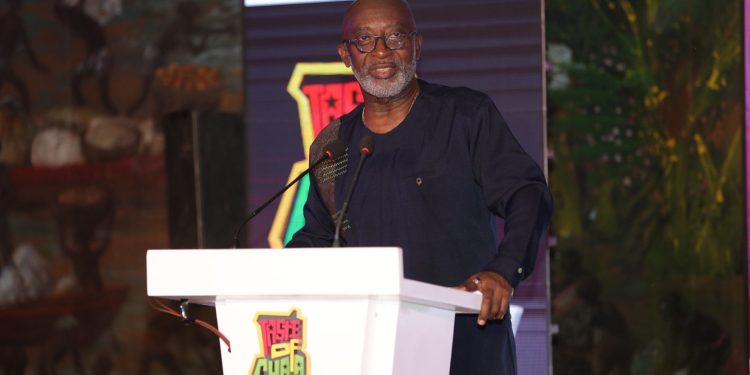 Ghana Investment Promotion Centre (GIPC) has officially launched the triennial edition of the most sought after, “Taste of Ghana” initiative as part of structured initiatives to sell Ghana to the world and promote the Ghanaian heritage.

The ‘Taste of Ghana 3.0’ with its predating hashtag, “#irepGH” was launched on Wednesday, August 31, 2021 at the Accra International Conference Centre and was graced by renowned and distinguished personalities in the world of creative arts and entertainment.

Delivering the opening remarks was CEO of the Ghana Investment Promotion Centre, Yofi Grant. He indicated that the “Ghana Beyond Aid” agenda through its series of initiatives have positioned Ghana as the doorway for the return to Africa.

He however charged that despite the disruption of the initiative in 2020 with Covid and its recurring loss to the world, “2020 actually did usher in Africa’s decade. A decade that we are going to see a different Africa. An Africa beyond aid and an Africa that facilitates partnerships and linkages for development and trade.”

He added, “This festival showcases Ghana in a 360-degree way and the two day event will showcase Ghana and all its endeavors, the way we live, things we do, the food we eat, the music we play, the clothes we wear and the different aspects of our culture that you’ll see. This year we want to infuse it with our brothers from the diaspora so we’re going to expect quite a significant participation form our brothers and sisters form the Caribbean and States.”

On his part, Deputy Minister for Tourism, Art and Culture, Mark Okraku Mantey commended organizers of the “Taste of Ghana” initiative. He also called on Ghanaians to continuously contribute to making the tourism sector the highest contributor to the country’s GDP.

He shared some developments in the sector, disclosing the Tourism Ministry is set to erect five unique theatres for creatives across the country.

“We have taken steps as a government to show that we are committed to developing the tourism sector including the arts and culture. Recently, we closed down the Kwame Nkrumah Memorial Park for a facelift. Our national museum is ready and so far attracted over 20,000 people.  These are some of the steps President Akufo-Addo has taken to show that he wants to make tourism the number one contributor to the country’s GDP. This year he has asked us as a ministry to put together five theatres for the creative industry across the country,” he added.

In between the launch of “Taste of Ghana 3.0”, attendees had the opportunity to taste Ghanaian indigenous products, witness an elegant display of fashion and were thrilled by the legendary Andy Dosty with historic Ghanaian music from independence to the game changers.

The festival this year will take place over two days and is planned to include a variety of indigenous cultural components, including food, dress, poetry, music, and theatrical acts, with a focus on the usage of Ghanaian languages to provide attendees a unique experience.