Gyakie puts on an amazing live performance at the Global Citizen Festival, Accra 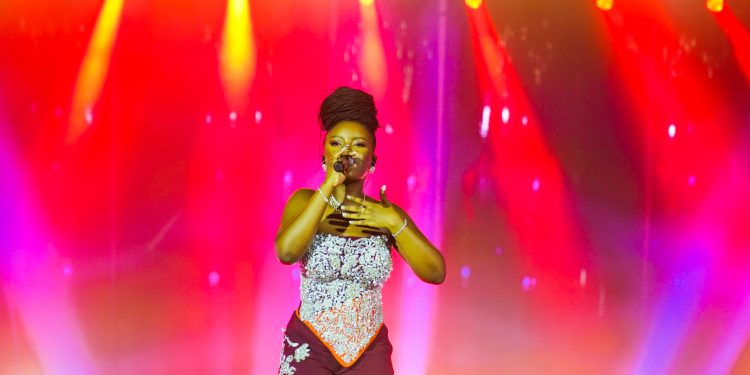 Gyakie Puts On An Amazing Live Performance At The Global Citizen Festival, Accra

As the only Ghanaian female artist to perform on the Global Citizen Festival stage at the Black Star Square last night, Gyakie did an incredible job representing the country and doing her part in being a contributing voice for global change.

The fast-rising singer started her performance with the reggae song Waka Waka off her recently released “My Diary” EP. An unlikely song intro to her performance, Gyakie delivered an amazing live rendition of the song with the help of the Ghana Army regimental Band and, while the Ghana flag and branded Gyakie flags were waved behind her: A statement of who she is and where she is from.

Fitting that she is referred to as Queen by people in the industry and her fans, Gyakie showed up on stage, resplendent in a bedazzled outfit by Eleanore, thrilling fans with “Far Away” and her hit single, “Forever” the remix, before ending with her current hit, “Something”. You could tell Gyakie’s band, backing vocalists and instrumentalists were testament to the fact that she has come a long way since her very first performance as an artist, and the future is promising on what she is capable of in the coming years.

In a statement from the Songbird on stage, Gyakie revealed the source of her consistency, hard work and achievements were the young girls around the world, who look up to her. She said: “Before I do anything, I try to picture two or three girls that look up to me. I have their faces etched in my mind as a reminder of my responsibility to show up in a way that inspires them and lets them know they can be anything they want to be, no matter the odds against them.”

The Global Citizen Festival is the world’s longest-running global campaign calling for an end to extreme poverty. Through the Festival, the organization brings together millions of people to amplify the message to #EndPovertyNow and this year, in celebrating 10 Years of impacting change, the event was split into two locations: Accra and New York with artists like Sza, Usher, Tems, Sarkodie and Stonebwoy performing while dignitaries from around the world including his Excellency, President Akuffo-Addo delivered speeches calling for leaders and persons around the world to take action to #EndPovertyNow.