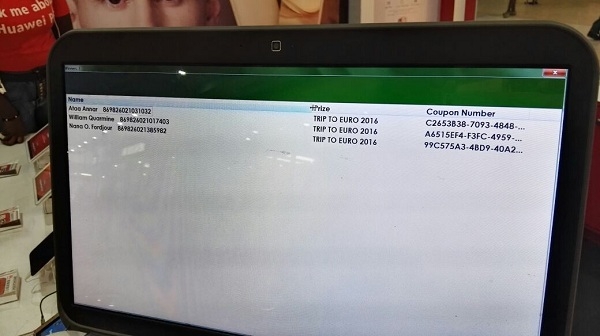 Three more lucky winners are heading to France, all thanks to Huawei Technologies Ghana SA, third and stellar Huawei P9 promo.
The Huawei P9 promo is an exciting draw that gives lucky buyers of Huawei’s elegant P9 smartphone the opportunity to win fully-paid trips to watch the Euro- 2016 finals in France.
The three: Ataa Annor, William Quarmine and Nana O. Fordjour who emerged as winners after the third draw conducted by the National Lottery Authority (NLA), expressed their excitement about the competition.
The Country Manager for Consumer Business at Huawei Technologies SA, Robin Sun said “Huawei has honoured its promise so far and has given seven lucky P9 buyers, the opportunity to watch the Euro, 2016 final”.
He further commended the NLA for exhibiting professionalism in their operations around the draws conducted so far. “I will use this opportunity to congratulate the NLA for their work. They have been fair and transparent in all three draws already executed”. Robin added.
The Retail and Marketing Manager at Huawei Technologies Ghana, Mrs. Jim Sufaiya Ibrahim Tanko who was also present at the third draw encouraged consumers to buy the Huawei P9 smartphone now to enable them take part in the final draw to become winners.
“We have all seen seven lucky people walk away with fully-paid trips to France over the last few of weeks”. We have three more seats to fill for the Euro 2016 finals, and I encourage everybody to participate in the final draw just by purchasing a Huawei P9 and you could be one of the final three winners”. She said.
The Huawei P9 family of exceptional devices fuses cool, sleek designs and precision detail with state-of-the art technology to change the way we see the world. Its sharp dual-lens camera takes smartphone photography to the next level, allowing people to capture both vivid colors and striking black and white images. The P9 continues to highlight Huawei’s legacy of premium mobile devices that are setting the industry standard for elegance and performance. Huawei’s products and services are available in more than 170 countries and are used by a third of the world’s population, ranking third in the world in mobile phone shipments.

WATCH: How Atom’s ‘Ye Wo Krom’ was played at Apple’s Developer Conference

WATCH: How Atom’s ‘Ye Wo Krom’ was played at Apple’s Developer Conference