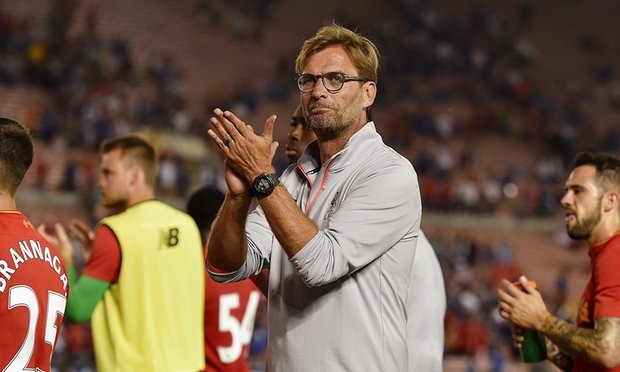 Jürgen Klopp has said Liverpool’s season is far from over and his team can reignite the race for the Premier League title with victory against Chelsea at Anfield.
Liverpool have fallen to fourth in the Premier League, 10 points adrift of Antonio Conte’s leaders, and gone out of the FA Cup and the EFL Cup following three consecutive home defeats that have derailed momentum at a crucial phase of the season.
The Merseyside club have not lost four consecutive matches at Anfield since 1923 but Klopp, rather than contemplate drifting 13 points behind Chelsea with another defeat, insists his only focus is on cutting the gap to seven points.
His Liverpool team are unbeaten against their rivals in the top six this season and boast the best record within that group of 12 points from a possible 18, including three at Stamford Bridge in September. With Sadio Mané, Philippe Coutinho, Roberto Firmino and Adam Lallana available for selection for the first time since Watford were beaten 6-1 on 6 November, Klopp insists a once-promising campaign can be revived.
“If we are seven points behind Chelsea we will not say that now we go for them – they might win the rest of their games – but we need the points,” the Liverpool manager said. “We cannot waste time or points any more. We never wanted to.
“It’s not about us to say we can catch them. If somebody is seven ahead of us then somebody else is ahead of us – it will be five to Arsenal or whatever. But that gap would obviously make the league that little bit more exciting for a lot of people. We want to go for these three points and that’s enough to be motivated at the highest, highest level.”
Klopp will assess Mané’s physical condition before finalising his selection, with the Senegal international arriving back on Merseyside from the Africa Cup of Nations in Gabon only after training on Monday. Liverpool had hoped to fly the forward back on a private jet on Sunday but the club were prevented by Senegal’s post-tournament plans.
Advertisement
“He was not allowed to leave, he had to go with the Senegal team to an event so he had to have another night away,” Klopp said. “But he had an English physiotherapist with him and had a recovery session this morning. We will see.”
The manager insists the recent run of one win in eight matches should not deflect from Liverpool’s improvement this season or the fact they remain firmly on course for Champions League qualification. The reaction to January’s setbacks in the league and cups will, he maintains, have a major influence on the team’s long‑term development.
He said: “Who thought we would change everything in a second in a season where Chelsea plays football like the stars from the sky, as we say in Germany? We don’t get a chance to develop? We don’t get a chance to improve?
“These things are part of it, though nobody wants to see them. As long as we really believe in a long‑term project while winning anything we can get in the short term – that’s what matters. And nobody should doubt we want this. We don’t say: ‘FA Cup – give it away, it’s not important.’ It’s not like this.
“The main thing is to arrive into the position where we are the team. At the moment, we are one of a few, which is better than being none of them. So we can go for a really high position at the end of the league season.
“We were eighth last season. If we can’t be second, third or fourth this season people would say: ‘OK, but we were in the Champions League in 1994,’ and all this stuff. We have to concentrate on this positive mood, staying the race now, staying on track now, because there’s a lot to go for.”
Since you’re here…
…we have a small favour to ask. More people are reading the Guardian than ever but far fewer are paying for it. And advertising revenues across the media are falling fast. So you can see why we need to ask for your help. The Guardian’s independent, investigative journalism takes a lot of time, money and hard work to produce. But we do it because we believe our perspective matters – because it might well be your perspective, too.
If everyone who reads our reporting, who likes it, helps to pay for it, our future would be much more secure.
Guardian.com