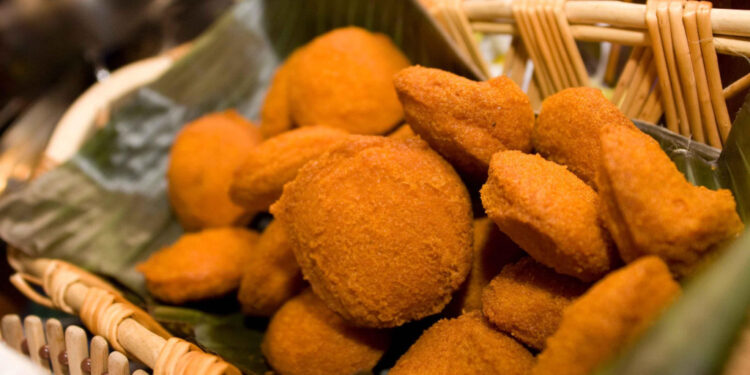 It will stun many that the bean cake called akara among the Yoruba, kosai in Hausa, acarajé in Brazil and koose in Ghana is not just a street food, but also serves a religious function or better put serves as food for the gods.
It is popular with the Yoruba people of south-western Nigeria and Sierra Leoneans. In Ghana, it is a popular breakfast dish, eaten with millet or corn pudding while in Nigeria it is eaten with bread, ogi or eko, a type of cornmeal made with fine corn flour.
The dish, made from peeled beans formed into a ball and then deep-fried in palm oil or vegetable oil, is found in West African and Brazilian cuisines. It was sent to the Americas, especially Brazil’s northeastern state of Bahia by the West Africa enslaved from Nigeria, Ghana, Togo, Benin, Mali, Gambia and Sierra Leone.
Although the basic ingredients are the same, there are variations to suit specific taste. Acarajé is made with cooked and mashed black eyed peas seasoned with salt and chopped onions molded into the shape of a large scone and deep-fried in palm oil in a wok-like pan in front of the customers stuffed with spicy pastes made from shrimp, ground cashews, palm oil and other ingredients.
In the Yoruba culture, akara plays a significant role when a person assumes the age of 70 or dies. It is fried in large quantity and distributed across every household close to the deceased. Back in the day, the cake was also prepared in large numbers as a sign of victory when warriors returned victorious from war. Wives of the warriors fried it and distributed them to fellow villagers as gratitude for the safe return of their husbands.
In Sierra Leone, akara aside being a street snack, is usually prepared upon the birth of a child, a wedding, funeral or party.

Acarajé is also sold on Brazil’s streets but here it is variously made with fried beef, mutton, dried shrimp, pigweed, fufu osun sauce and coconut. Distinct sellers wear all-white cotton dresses and headscarves and caps. The bean cake is reported to have made its way to Bahia in the 19th century.
Earnings from its sale was used to sometimes buy the freedom of enslaved family members until the abolition of slavery in Brazil in 1888 while serving as a source of family income. It also has a notable presence in Sergipe and the markets of Rio de Janeiro.
Acarajé serves as both a religious offering to the gods in the Candomblé religion and as street food.
As an essential ritual food used in Afro-Brazilian religious traditions such as Candomblé, it is offered to the orixá Exu. They vary in size based on their offering to a specific deity: large, round acarajé are offered to Xangô; smaller ones in form are offered to Iansã. Small, fritter-size acarajé are offered to Erês, or child spirits. Acarajé is used in Candomblé rituals in the states of Bahia, Rio de Janeiro, Pernambuco, Alagoas, Sergipe and Maranhão.
Acarajé was listed as a federal immaterial asset (patrimônio nacional imaterial), by the National Institute of Historic and Artistic Heritage in 2004; the role of baianas in the preparation and sale of acarajé was recognized in the same act.

I am not defined by awards-Akwaboah

I looked up to Reggie Rockstone – Obrafour reveals

I looked up to Reggie Rockstone - Obrafour reveals