My comment on Komla Dumor taken out of context — Nana Konadu 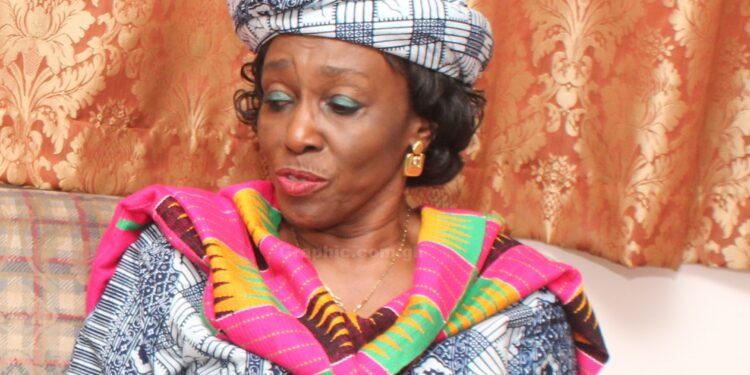 A former First Lady, Nana Konadu Agyeman-Rawlings, has said her comments about providing support for Komla Dumor at the university level has been taken out of context.
“It is very unfortunate that what I said on an Accra FM radio station has been taken out of context and is being used for mischief,” Nana Konadu, who is also the flag bearer of the National Democratic Party (NDP), told the Daily Graphic in an interview in Accra on Tuesday.
She spoke on a broad range of issues, including recent media reports that the former First Lady had paid the tuition fees of Mr Dumor at the university level and how the NDP was preparing to prosecute its 2016 election campaign to win the hearts and minds of the Ghanaian electorate.
“Through my role as First Lady, President of the 31st December Women’s Movement and a mother, I have come into contact with countless number of persons from different backgrounds, who have reached out to me. What do I have to gain by imputing falsehood to such a matter?” she asked.
Explaining further, Nana Konadu indicated that she went for an interview at an Accra-based radio station, last week and during the interview, a question came up on “identification haircut.”
“In my answer I said I did not have a hand in the matter of the haircut and recalled with disappointment an interview I granted to Mr Dumor, who was then with Accra-based Joy FM, in which the journalist decided to focus on the latter part of the interview, which failed to present a true picture of the entire conversation,” she stated.
Saddened
“The distortion of the identification haircut story by Komla Dumor saddened me a lot, especially after he [Komla] had come to me for assistance to enter the University of Ghana, Legon,” Mrs Rawlings asserted.
Explaining further, she said, “I had a personal relationship with Komla Dumor. His mother’s brother, the late Tony Gbeho, was my husband’s best friend, so once he [Komla] reached out to me, I was obligated to help him.”
Asked to explain what sort of assistance, Mrs Rawlings would go no further than to say “it was financial.”
“As I told you earlier, my intention was not to speak about Komla Dumor; it was provoked by a question from the Starr FM interviewer. It is not my intention to bring Komla Dumor into disrepute but just setting the records straight by bringing out a fact. Komla Dumor reached out to me at a particular time in his life, and I helped him where I could. This is the fact.”
She disclosed that she had supported many people, if not hundreds of people, from all walks of life, including [some] current leading politicians, up to the university level, “and if I have to seek gratification, I will have to bring you a tall list,” she told the Daily Graphic.
Background
After the interview, the family of the late Dumor has dismissed the claim as untrue.
The family disclosed that at the time Komla was schooling, the government had not introduced tuition fees.
Graphic.com.gh

LISTEN UP: Joel Orleans features Kwaw Kese on 'Give Me Room'