NPP Goes Nationwide With Adopt A Polling Station Blitz Samira, Mac Manu and others on the streets 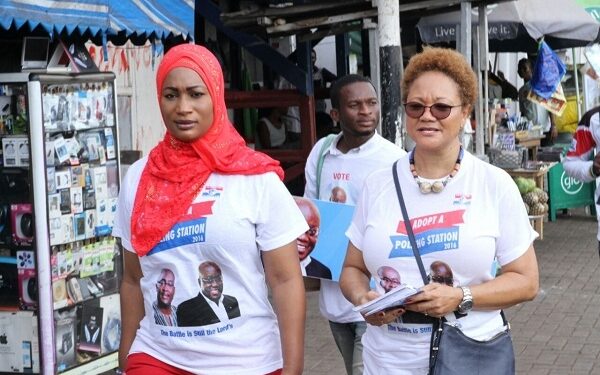 Senior executives and members of the New Patriotic across the country, this morning, continued their awareness creation exercise, for Ghanains to adopt various polling stations on elections day.
The awareness creation exercise saw party members and executives distributing party posters and stickers to motorists and shop owners.
The exercise was also to create awareness on the need for people to play a role at the polling station.
In Accra, the wife of the Vice Presidential Candidate, Samira Bawumia, took to the streets of Mamobi and Nima to share flyers and educate people on the need to vote.
“Election 2016 is almost here. Don’t sit on the fence. Join the movement for Change,” Mrs Bawumia told motorists.
The chairman of the NPP 2016 campaign, Mr. Mac Manu, who led another team said, the polling station is the most important level of the election. “Therefore, we have polling agents who supervise the elections at those places; those who go round to call the electorates from their homes to come out and vote. We also have those who secure the polling stations to ensure there is no problem at the stations.”
“This requires a lot of money and time. We as sympathisers of the party must, therefore, support the NPP in this regard. Some can bring foodstuff, money, your time and energy will also be appreciated and any other thing you think you can help with is welcome,” he explained.
In order to adopt polling stations, people have been called upon to send money to mobile money number 0548407629.
An account has also been created at the Kojo Thompson Road Branch of Zenith Bank under the name ‘I am for Nana Foundation’ with the account 6010614929 in which contributions could also be sent.
‘Adopt-A-Polling Station’ forms have also been deposited at the various NPP offices across the country with soft copies available on www.iamfornana.com/adopt.