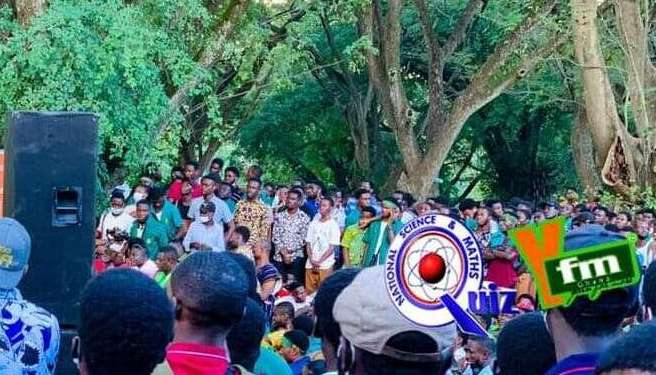 YFM, the biggest youth oriented station in Ghana, has used it’s huge platform to support the growth of science and maths in the country. Providing an opportunity for the brightest minds in Senior High Schools (SHS) battle it out to showcase their excellence in science and Mathematics.
The National Science and Maths Quiz is an annual science and mathematics content-based national level quiz competition for senior high schools in Ghana. It has been produced by Primetime Limited,since 1993.

The final showdown came off at the Kwame Nkrumah University of Science and Technology (KNUST) in the Ashanti Regional capital, Kumasi.

Speaking about the partnership, Osei Kufour head of the Y Triangle, noted that,

“NSMQ has over the years contributed to the growth of Maths and science in the country, hence deserves YFM’s support.
Many people see maths and science as very difficult subjects but the NSMQ is making it very attractive for more students to pursue science. Science as a discipline is very important, because Science gives deep attention to the quality and interaction of the things that surround us”.

He also mentioned that one of his favorite part of this year is having a young girl make it to the final stage of the competition. ” You know how society sees science as predominantly a male dominated field, Francisca Lamisi proved that girls can pursue science, and her feat will encourage other young girls to pursue science and Maths, that is a good thing.

YFM reaches the highest number of young people in the country on a daily basis. With our huge listenership on the YFM Triangle of Accra, Kumasi and Takoradi, our numbers on our social media, our website and to top it all our young vibrant presenters and DJ’s. We came on board with all these assets” he stated.

Journey so far
The preliminary stage of competitions took place at 8 different venues across the country, with schools from all 16 regions.

Prempeh won with 53 points as against 49 points by the Presbyterian Boys’ Senior High School, Legon (PRESEC.) As champions for 2021, Prempeh College got the prize money of GH¢5300 from Absa Bank and an additional GH¢10,000 from Prudential Bank and the NSMQ star with the highest scorer from AirtelTigo.

KETASCO earned GH¢3000 as their prize money from Absa Bank as bronze winners.

For their efforts, Prempeh College took home the coveted trophy and a cash of GH¢80,000. GH¢40,000 would go to the school while the teachers and the contestants would split the rest GH¢20,000.00 each.

Records and most wins

It was the first time KETASCO was reaching the final stage of the competition.

Francis Lamisi of KETASCO is the first lady in eight years to make it to an NSMQ finals.

PRESEC is still in the lead for winning the contest six times.

Prempeh College currently occupies the second position on the table of schools with the most wins, having won the competition five times.