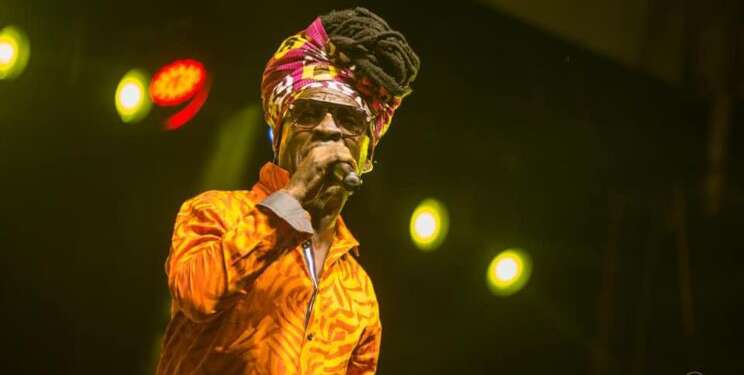 Known as “Mr. Music Man,” Kojo Antwi is a Ghanaian Afro-pop, highlife, and reggae musician. His original birth name is Julius Kojo Antwi and was born into a family of 13 siblings. He spent his early years in Darkuman, a suburb of Accra.

After a short period, the genuine and youthful band caught the attention of Ghanaians and neighbouring West African countries. The band was later discovered by an international agent who flew them to Europe to perform at festivals and concerts. The band however disintegrated after they faced issues of immigration and popularity.

Kojo Antwi then pursued a solo music career and subsequently released his first solo album ‘All I Need is You’ in 1986. The album became the talk of the town and an instant hit after its release.

Kojo Antwi’s style of music has been dynamic and consistent throughout his music career. His music is a cross of Ghanaian highlife, Congolese soukous, Caribbean lovers rock, and African American soul and R&B.

Kojo in his music career is credited with 22 albums, with his famous “Tom & Jerry” song which became one of the most successful songs in Ghana, West Africa.

Kojo Antwi’s magnificent talent and versatility became famous and toured several African and European countries including; Togo, Nigeria, Senegal, and the Ivory Coast. He also passed through Denmark, Sweden, Switzerland, Germany, and the U.K. performing upon the invitation of the African Societies

Kojo Antwi at the peak of his musical career won numerous awards and honours including, the West Africa Tourism Award, All Africa Music Awards, Kora Award, and the Our Music Award.

He also served as Chairman of the Ghana Music Rights Organisation (GHAMRO) in 2015, the law-mandated agency responsible for collecting revenue for musicians in the country.

Kojo Antwi seems not to have laid down his music tools after featuring Ghanaian reggae/ dancehall act Stonebwoy titled ‘Akyekyede3 Nante3’ in 2020 and being featured on King Promise’s ‘Bra’ song in 2019.

The Music Man has also been performing at events including the MOBO concert organized by Citi TV and Citi FM.