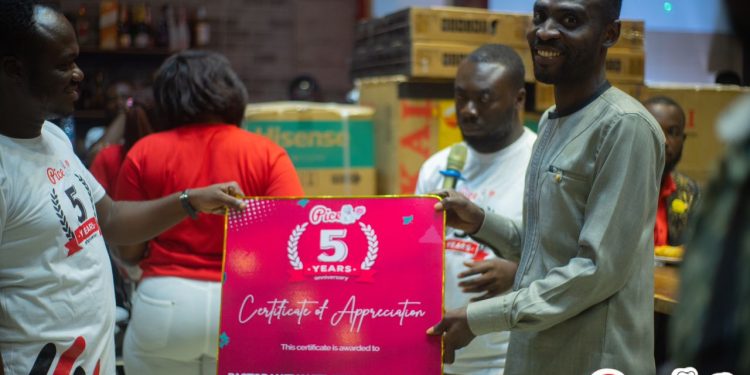 0
SHARES
44
VIEWS
Share on FacebookShare on TwitterShare on Whatsapp

A few days ago, Pice group Of companies honoured some of it’s longest serving workers, plus some new but hardworking staff for their loyalty and contributions to the operations of the company. The event hosted by YFM’s Kay Official took place at the Kumasi City mall.

PICE group of companies which has 3 different branches and a new plush lounge known as P2 Lounge, held an employee awards night to celebrate the 5th anniversary of the company’s existence in business.

The awardees were independently assessed by a committee of their peers and selected on very competitive basis, were awarded for distinguishing themselves in their various fields during the year 2022.

Speaking at the event, CEO of the company Mr. Pious Agyemang opined that, it was necessary to show recognition and appreciation to some outstanding workers in each unit to say Thank You and further encourage others to also show true commitment in carrying out thier mandates.

Recipients on the night walked away with various citations, plaques, electronic appliances & more.

Two of the them were YFM Kumasi’s DJ Bongo & Dj Coleda for their unflinching loyalty and hard work. They both work at the P2 lounge from Fridays to Sundays.

The overall winner Emmanuel Asante, also known as “Chef 99 gh” was gifted a brand new Hyundai Elantra for his unrivaled dedication and sacrifices to the brand’s success.

Everyone present at the the Ceremony was officially informed about the newest addition to the brand Pice, with it’s grand unveiling in December at Bantama this year.