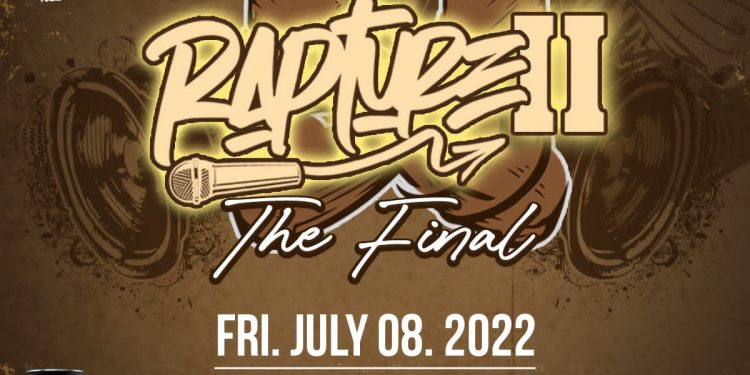 Stage set, light check, sound check and the final die has been cast for the finals of the second edition of Ghana’s ultimate rap reality show, Rapture.

The finals of Rapture II will take place at Purple Pub-Osu on Friday, July 8, 2022 at 6pm.

Rapture II began with intense competition amongst contestants and this momentum has only kept on increasing as the healthy rivalry has seen contenders delivering sick and dope verses week in week out.

After weeks of intensive and interesting battles and, punchlines, the men have been separated from the boys as ten (10) strong bouls have sailed through to the finals to battle it for the ‘Rap god’ crown.

Rappers from the capital, Accra proved they have the best of substance in rap music as they dominate the finals with six (6) contestants; Kwaku Wina, Ragnar, Kweku Mortey, Blvvk Life, Qalipo and MG1.

Two (2) contestants from Kumasi were also able to secure spots in the final; Kay Burna and Ampaabene.

Yaw King and Kwame Prosper will either uphold or taint the reputation of Takoradi rappers as they represent the oil city.

Project Lead for Rapture, Ato Kwamina shared the finals of the contest is going to be the most talked about event in Ghana. According to him, the contest will not only discover the best of rappers in the country, but will also be a springboard for their budding careers.

He applauded both evicted contestants and those in the game for the putting up a good show for the audience.

“In making the finals dapper, we will have the Kula and AJ as MC’s for the night and this duo will bring us nothing but the best. The judges for the night will not just people who an ear for music, but those who also know what it takes to prosper as an artistes commercially and business like. The ever green pioneer of Hiplife in Ghana, Reggie Rockstone, the man with a legacy in Ghana rap, Eddie Blay Jr and the one and only champion of YFM, the master mind behind the brand for the young and young at heart, Nockus will be judges for the night.”