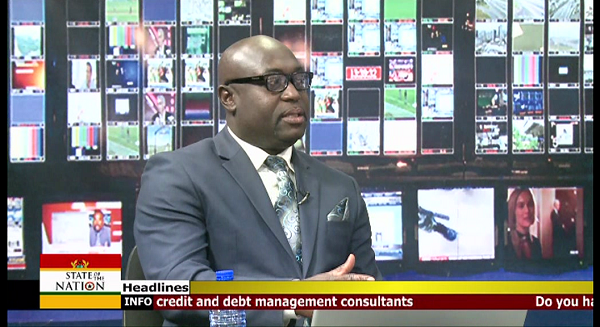 William Nyarko, the former Ghanaian Chronicle reporter who was at the forefront of the Rawlings/Abacha $5m bribe story says the former President’s wavering posture with the matter suggests he is being economical with the truth as regards events from 18 years ago.
In a series of stories in 1998, William Nyarko, then the Deputy News Editor of the Ghanaian Chronicle had investigated and published stories alluding to the fact that Ghana’s President at the time had received a $5m as bribe to help sing the praises of the then Nigerian dictator, Saani Abacha.
Speaking to Kwame Gyan on e.TV Ghana’s State of the Nation daily current affairs programme, Mr Nyarko said “You have to look at it from the view of the person who delivered the money. The stories are on the space pace – which is that President Rawlings admits that it was Gwarzo who brought the money. So that is settled. Gwarzo said to investigators and to me that he gave President Rawlings $5m, and President Rawlings at the time said nothing was received. So you have to match the credibility of the two. So on the balance of the scale of previous statements, how likely are you to believe that it was less when one had denied ever receiving anything. Personally I believe it was $5m”
William Nyarko, who is currently the Executive Director at the Africa Center for International Law and Accountability (ACILA) in the interview narrated how he pursued the story in Lagos and ‘Gwarzoland’ after it had emerged following the death of the dictator that some amount of money had been given to the Ghanaian President as a gift. According to him, the Ghanaian Chronicle in 1998 took the initiative to pursue the story in Nigeria, including making contact with the Office of the President in Aso Rock. In one of the stories, Mr. Nyarko had reported that “The Nigerian Government finally responded to our persistent inquiries on the President Rawlings/ Abacha alleged bribery affair with a diplomatic response that should leave The Speaker of Parliament no room to reject tomorrow’s motion by the Minority calling for a probe. In his ruling last Thursday on the admissibility of the Minority motion calling for a probe into the allegation, the Speaker called for more evidence to justify the course of action in the motion proposed by the Minority. Faced with the clearest opportunity yet to diffuse the raging controversy by making a categorical NO or YES answer, Aso Rock took the only diplomatic route that is available to a “friendly” government “No comment, please”.
In a short letter with reference number SH/CPS/GC/VOL.2/98 faxed to The Ghanaian Chronicle on November 27, 1998, Alhaji Mohammed Haruna, the Chief Press Secretary to the Head of State, replied unequivocally to our direct question on the possible culpability of our leader, President Rawlings: “THE STATE HOUSE, ASO ROCK, ABUJA HAS NO COMMENT ON THIS MATTER, PLEASE.” The letter was signed for the Chief Press Secretary by Mr. Musa Aduwak. We had written to The Government of Nigeria in a letter headed “:RE- LATE ABACHA’S ALLEGED $5 MILLION BRIBE TO PRESIDENT RAWLINGS” asking directly whether The Chief Press Secretary, one-time editor of The Influential New Nigerian, would also offer any comments, insights or confirmation of the Nigerian Post Express newspaper’s allegations about President Rawlings’ $ 5million charge.
Mr Nyarko has also in recent Facebook posts thrown the question on whether or not President Rawlings should refund the $5m as contained in official records in Nigeria. “It turns out that it’s not looking good for President Rawlings. Apparently Nigeria had asked President Rawlings to refund the Abacha fresh US-dollar-notes in 1998, according to Sahara Reporters in Nigeria. Now the request for President Rawlings to refund the money is building up again in Nigeria. Should he refund the money? To refund or not to refund, that is the question”, he asks.
William Nyarko’s full interview with Kwame Gyan can be watched on this link: https://youtu.be/MZLS_EnsOtM He spoke about the state of the Commission on Human Rights and Administrative Justice as well as other details on the raging Rawlings/Abacha $5m saga.