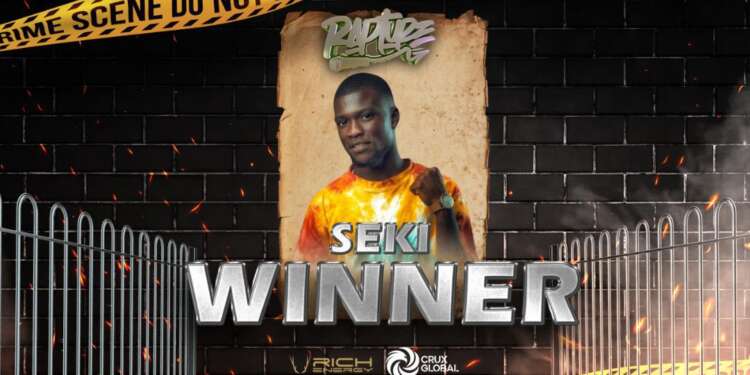 Winner of the maiden edition of YFM’s Rapture Reality Talent show, Seki Music is already feeling like a superstar after beating 6 others to claim the Rapture crown.

The rapper who is appreciative of the YFM team for organizing the Rapture competition indicated, “I feel like a superstar already. I will always feel excited for becoming the rap god. Big ups to YFM and anyone who supported the dream and those who motivated me to sign up for the contest.”

On his accord, the fame and support he is receiving after winning the Rapture crown is just the beginning of greater things.

Speaking on his performance at the Rapture finals on Y107.9FM’s Dryve Of Your Lyfe with Kojo Manuel he revealed he was well composed as he knew he was better than his competitors.

“I wasn’t nervous or sacred because I was fully prepared for the game. None of the other contestants scared me.”

The only moment Seki Music was shaken during the contest was when it was time for the declaration of the winner of the Rapture crown. “I felt goosebumps all over and it wasn’t easy but I left it all to God. “

Seki Music was crowned the ‘Rapture god’ after impressing audience and judges from start to finish of the finals of the Rapture Reality Talent show at the Accra Mall Food Court.

Takoradi based Seki Music took home the GHc60,000 prize package, which included a digital distribution deal from Crux Global and the bragging right of Rapture god at the end of the night.

The term ‘Rapture’ which was beautifully coined from source words Rap + Culture and Future is a YFM initiative targeted at unearthing talent and reviving the rap culture.