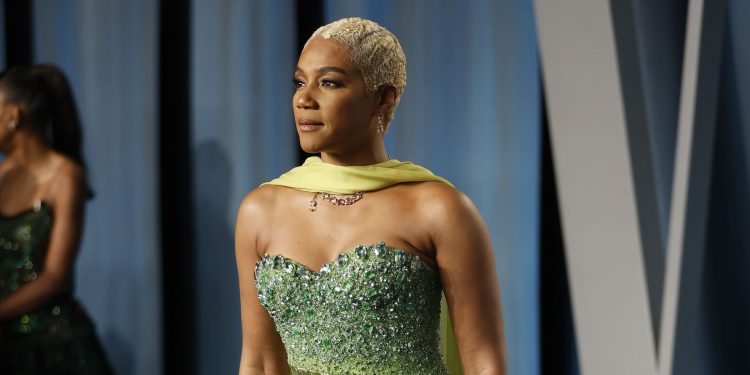 Tiffany Haddish says she “deeply” regrets performing in a skit years ago that led to her and fellow comedic actor Aries Spears being accused of child sex abuse.

“I know people have a bunch of questions. I get it,” Haddish wrote in a statement posted on her verified Instagram account on Monday.
“I’m right there with you,” she continued. “Unfortunately, because there is an ongoing legal case, there’s very little that I can say right now.”
Haddish and Spears have been accused of having “groomed and molested” two then-minor siblings, according to a lawsuit filed in Los Angeles Superior Court last week.
“Jane Doe” and “John Doe” (their names are withheld to protect their privacy) were 14 and 7, respectively, when they allege that Haddish and Spears had them participate in sexually suggestive videos in separate incidents in 2013 and 2014, according to the complaint, a copy of which was obtained by CNN.
“He isn’t going to fall for any shakedown,” Debra Opri, an attorney for Spears, said in a statement to CNN.
An attorney for Haddish told CNN that the plaintiff’s mother “has been trying to assert these bogus claims against Ms. Haddish for several years.”
“Every attorney who has initially taken on her case — and there were several — ultimately dropped the matter once it became clear that the claims were meritless and Ms. Haddish would not be shaken down,” the statement read, adding that the mother “has her adult daughter representing herself in this lawsuit. The two of them will together face the consequences of pursuing this frivolous action.”
“John Doe” alleges that in summer 2014, Haddish “offered to book, arrange, and film Mr. Doe content for a Nickelodeon sizzle reel at the home of Spears. Haddish claimed the reel would be used to book Mr. Doe on Nickelodeon.”
“Upon information and belief, Haddish and Spears removed the 7-year-old victim from his sister, placed him upstairs in a bedroom, and stripped the child down to his underwear,” according to the suit. “The video was entitled ‘Through A Pedophiles Eyes’ and shows Spears lusting over the 7-year-old child” and rubbing his back.
Haddish played the boy’s mother in the video, which has circulated on social media.
In her statement Monday, Haddish wrote that “…while this sketch was intended to be comedic, it wasn’t funny at all – and I deeply regret having agreed to act in it.”
“I really look forward to being able to share a lot more about this situation as soon as I can,” Haddish concluded her statement.
Source: CNN
Previous Post