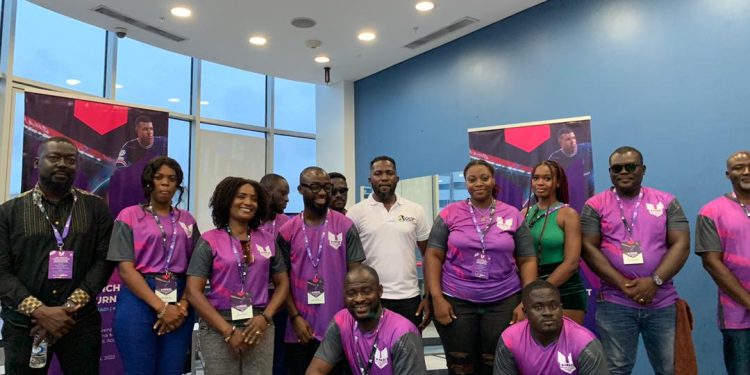 0
SHARES
150
VIEWS
Share on FacebookShare on TwitterShare on Whatsapp

With “Game It Up Hub” as the official partners, the launch held at Marina Mall on Friday, June 24, 2022 saw a glimpse exhibition of skills and aptitude from gamers participating in the tournament. In attendance were Esports gaming teams, scouts, managers, patriots of esports gaming and acting president of the Ghana Esports Federation, Igor Boumekpo.

The maiden FIFA22 tournament is expected to take place in three different cities namely, Accra, Takoradi and Kumasi. Six teams made up of three players and a manager will compete in the biggest esports competition in Ghana. The winning team is expected to scoop home a whopping GHC 10,000 and other mouthwatering prizes.

During the launch, the founder of the Ultimate Pro Gaming (UPG) Esports, Antony Botchway expressed desire to fortify Esports gaming in Ghana and across the African continent, improving the niche and sustain a market pull in various communities.

“This was supposed to happen in 2020 but covid struck and I didn’t want go the virtual way. I wanted more of the physical euphoria and buzz. It’s been my goal to make Esports widely accepted in Ghana and improve the current market into a pro competition. Elsewhere, gamers earn lots more and deservedly so. I believe we have lots of talented gamers in the country but most end up as gamblers. We want to use this platform to pull them together, have the fun they want and play legitimately. This will also help them stand a chance to take home lots of amazing prizes,” he said.

He further disclosed that multiple-award-winning Ghanaian Hiplife artiste, Kofi Kinaata, has registered his team to compete in Takoradi. He admonished investors and sponsors to hope on the vision to usher in a new dawn of an era in Ghana’s sports and entertainment circle.

On his part, Mr Yaw Kyeremeh, manager of the “Game It Up Hub” at Marina Mall said, “It was all about finding an avenue for UPG Esports to achieve their goals. We have our gaming hubs across the country including the three cities hosting the competition. This is going to provide the competition the consistency and cohesiveness it needs to be a success.”

Mr Igor Boumekpo, Acting President of the Ghana Esports Federation also added, “It’s about time people understood that Esports gaming is not time-wasting and goes beyond the fun. It is now a profession in the fast-evolving world we live in. Let’s all maximize support to the Ultimate Pro Gaming FIFA22 tournament to achieve the desired objective.

Speaking on the stereotyping associated with ladies in Esports gaming, she said, “You don’t have to listen to critics to draw you down to the base. If you are passionate about something, you need to go all out and get it because trust me it’s worth every shot. Don’t pay attention to the critics unless maybe it’s about aspects of your game you need to change.”

For more information on how to register your team of three players and a manager, call 0244451262 or visit www.UltimateProGaming.com or follow @UPGTournament on Facebook.
Register Online now and be the Ultimate Gamer!

Ghana and Nigeria have a special bond – Ladé