Victorien Adebayor is a great player, I can’t wait to reunite with him at HB Koge-Former Team Mate 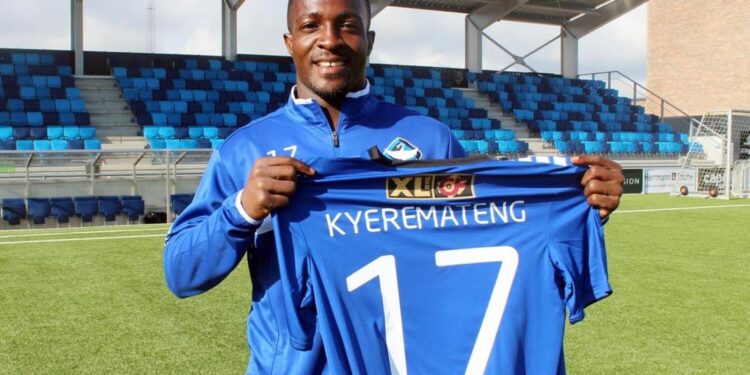 Former Inter Allies attacker, Kwabena Kyeremateng has expressed his delight and optimism with the latest report that, his former team mate, Victorien Adebayor is set to join him at Danish second division side HB Kobe.
The top scorer of the cancelled 2019/2020 Ghana Premier League with 12 goals is set to leave topflight side Inter Allies, after the club reached an agreement with its partners HB Koge in Denmark according to reports in the local media.
Adebayor’s move to Denmark could materialize sooner than later considering the club’s former coach, Henrik Lehm, has been in Ghana since last year with the ‘Eleven Is To One’ lads.
The report linking the Nigerian star to HB Koge gathered momentum after the technical director of Inter Allies, Willie Klottse revealed on Accra based Happy FM that, his club is being forced to sell the player due to their inability to meet his current salary and other entitlements after the outbreak of the coronavirus pandemic brought dire financial hardship at the club.
Kwabena Kyeremateng, who had a brief stint with Inter Allies between 2019-2020 and was part of the national U20 squad during the Africa qualifiers in 2018 in an exclusive interview with Stephen-Zando on Kumasi based YFM reserved special remarks for Adebayor, saying, he can’t wait to play with him in Denmark.
“I’m really happy for him because he is a good player, I played with him couple of times in Ghana,” he said.
“He is technically good and aside being on the field, he is a nice person outside the pitch as well so it will be a pleasure playing with him here”. He added.
Kyeremateng is looking forward to reuniting with his former team mate at HB Koge but admitted, he has not spoken to Adebayor yet.
“I have not got in touch with him yet but I look forward to his transfer so definitely I will talk to him.” He finished.
Kwabena Keyeremateng signed for the Danish side in March 2020 and he was on the score sheet with Victorien Adebayor when Inter Allies defeated Bechem United by 2-1 early this year in the Ghana Premier League.
By: Stephen Zando