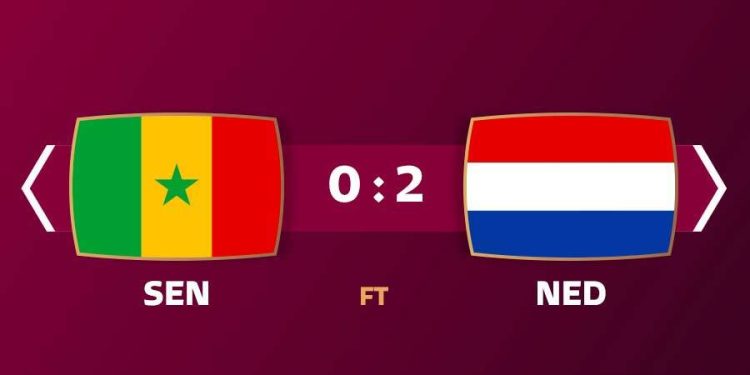 Frenkie de Jong chipped the ball into the box, and PSV Eindhoven forward Cody Gakpo sprinted to the ball before Chelsea goalkeeper Edouard Mendy to give the Dutch the lead with six minutes left.

To add a second in stoppage time and seal the victory, substitute Davy Klaassen pounced on a rebound from Memphis Depay’s attempt.

The Dutch supporters at the other end of the Al Thumama Stadium leapt to their feet as Gakpo spun away in jubilation in front of the Senegal fans behind the goal.

Even before Klaassen ensured victory in the ninth and deciding minute of added time, the crowd was already screaming the name of their side because they knew it was imminent.

Prior to it, Senegal, who had been a threat the entire game, came close to tying the score when Papa Gueye blasted a shot into the bottom left corner, but Dutch goalkeeper Andries Noppert stopped it with his fingertips.

Long stretches of the game hinted at a goal, but neither side was merciless. Louis van Gaal, the manager of the Netherlands, even jeopardised Depay’s health by substituting him in the second half of the game.

The risk paid off as the Netherlands secured a vital three points in a game many believe could decide the winners of Group A.

They now sit joint-top in the group with Ecuador, who beat hosts Qatar 2-0 on Sunday evening.

Senegal, without injured key forward Sadio Mane during the competition, looked like a side missing their main attacking threat but can take confidence from the number of times they troubled the Dutch defence.