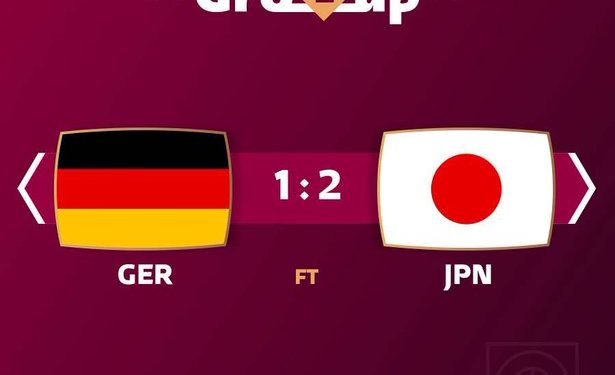 Four-time World Champions Germany were shocked by Japan in their opening World Cup game in Qatar courtesy to an incredible late comeback.

Before Japan prompted the Khalifa International Stadium to explode in a mix of joy and shock, Germany had controlled the game for long stretches but failed to capitalise on their pressure.

Substitute Takuma Asano raced up to the photographers in the stadium’s corner in utter joy after squeezing in a thunderous goal from a tight angle to give Japan a 2-1 lead.

The moment the ball rolled from the roof of the net and the crowd realised it had been put in, there was a moment of silence throughout the stadium.

Prior to Japan’s replacement Ritsu Doan tying the score in the 75th minute, Germany’s Ilkay Gundogan had given his team the lead from the penalty spot in the first half.

The goal was scored after a series of incredible saves at each end, including a double save by Japan’s Shuichi Gonda to stop Serge Gnabry and Jonas Hofmann and a save by Germany’s Manuel Neuer to stop Junya Ito.

Germany, who placed last in their group in Russia in 2018, had missed numerous opportunities to increase their lead when it was 1-0.

In Group E, they will face tough competition from 2010 group champions Spain on Sunday before playing Costa Rica in the group’s final match.

It wasn’t about making a political statement – human rights are non-negotiable. That should be taken for granted, but it still isn’t the case. That’s why this message is so important to us.

Denying us the armband is the same as denying us a voice. We stand by our position. pic.twitter.com/tiQKuE4XV7

In a team portrait taken prior to kickoff, Germany’s players covered their mouths, and Nancy Faeser, a German government politician, wore the OneLove armband in the crowd.

It follows reports that the German Football Federation (DFB) is looking into the legality of Fifa’s threat to punish players for donning the OneLove armband in Qatar.

The DFB later tweeted that human rights are “non-negotiable” and “we stand by our position”.

[Watch]: Sarkodie performs ‘Country Side’ with Black Sherif for the first time in London