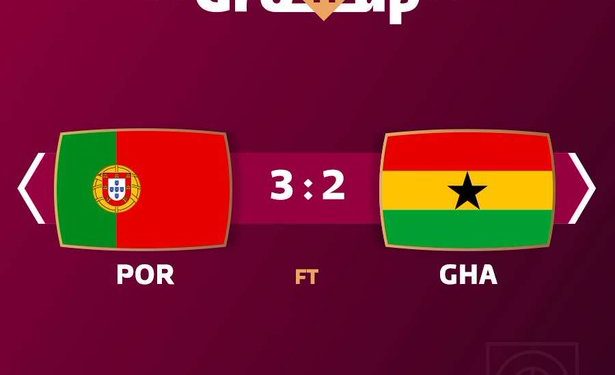 Portugal started their campaign with a dramatic victory over Ghana, and Cristiano Ronaldo became the first player to score at five different Fifa World Cups.

For the first time since his contentious television interview last week and his subsequent release by Manchester United as a result of the statements, Ronaldo was in action.

Out of this world 🇵🇹

And the 37-year-old scored the game’s first goal from the penalty spot after Southampton defender Mohammed Salisu of Ghana tripped him in the box.

Early on, Captain Ronaldo had a number of opportunities, but Lawrence Ati-Zigi stopped a low attempt and he also headed wide of the far post.

While Ghana failed to register a single shot in the opening round, the striker had a goal disallowed for a foul on Alexander Djiku.

The second period saw the Africans advance after Mohammed Kudus nearly missed the far post, and they were rewarded when Andre Ayew equalised from close range.

Rafael Leao, a replacement, calmly stroked in only seconds after coming on, but Portugal answered with two goals in two minutes to secure the points. Joao Felix converted a brilliantly clipped finish.

Goalkeeper Diogo Costa appeared oblivious that Inaki Williams was behind him when he placed the ball down, but after sprinting to intercept it, the Ghana striker slipped just in time, resulting in a scuffed shot being pushed off the line.

After Uruguay and South Korea played to a scoreless draw earlier on Thursday, Portugal’s victory puts them at the top of Group H.