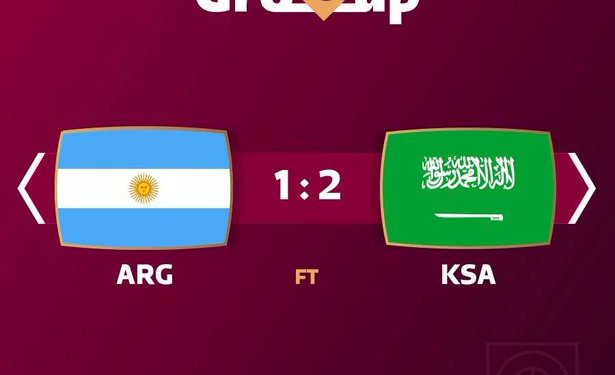 With a thrilling comeback victory over two-time champion Argentina in Group C’s opening match in Lusail, daring and brilliant Saudi Arabia side, pulled off one of the World Cup’s biggest upsets.

Saudi Arabia, ranked 51st in the world, might have been eliminated early on after Lionel Messi scored the game’s first goal from the penalty spot and Argentina had three goals disallowed for offside.

Saleh Al-Shehri tied the score with a low effort before Salem Al Dawsari gave Saudi Arabia the lead, causing chaos in the stands, and the team then turned the game around in a stunning 10-minute span following halftime.

After displaying their ruthlessness on one end, the Green Falcons showed their toughness on the other, fending off an outstanding Argentina front line to record just their fourth World Cup victory in history and open up the group.

Argentina under Lionel Scaloni entered the competition as one of the favourites after going 36 games without losing, which included winning the 2021 Copa America.

They now have to do everything they can to maintain their chances of achieving their first major victory since 1986 and give Messi a deserving cap to what will likely be his final World Cup.

They face Mexico on Saturday, while Saudi Arabia take on Poland.

Lonely Planet named Ghana as top destination for connecting in 2023

Lonely Planet named Ghana as top destination for connecting in 2023