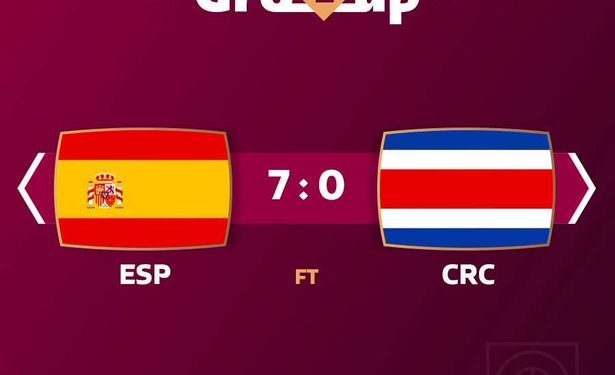 #WorldCupOnY: Spain begin their camping with a thumping win over Costa Rica

Spain outclassed Costa Rica and began their World Cup in spectacular fashion with a great passing display by Gavi, who made his debut on the international scene with a beautiful volley.

For the 2010 winners, it was a breeze from beginning to end thanks to two goals from Ferran Torres.

However, Gavi’s stunning volleyed goal, which made him the youngest World Cup scorer since Pele, was the best of their seven goals. The Barcelona teenager used the outside of his foot to send a dropping ball home via the post.

There was never any indication that another upset would occur in this competition, despite the fact that Spain’s Group E rivals Germany were the most recent victims after losing to Japan in overtime earlier on Wednesday.

Costa Rica was unable to keep up with La Roja’s pace, mobility, and precision when they advanced because of their overwhelming dominance from the outset.

Dani Olmo and Marco Asensio both missed with their opening shots in the first ten minutes for the Euro 2020 semi-finalists, but they did not have to wait long to take the lead.

Olmo had some work to do when he intercepted Gavi’s deft chipped pass into the box, but he used his muscle to hold off Oscar Duarte before bursting into space and deftly slotting past the charging Keylor Navas.

Costa Rica, who was the last team to qualify for Qatar, had a rocky start, and things swiftly grew worse for the 2014 quarterfinalists.

Once more, Spain moved unimpeded along the middle of the field before the ball was stretched left to Jordi Alba, whose driven cross was met forcefully by Asensio. Navas, however, should have saved the situation much better.

Victory was sealed just after the half-hour mark, when Torres sent Navas the wrong way from the spot after Duarte had hacked at Alba in the box.

But there was more misery to come for Costa Rica after the break, with Spain still hungry for goals.

Torres capitalised on more poor defending to make it 4-0, collecting a loose ball after bursting into the box and then calmly firing home.

Gavi’s superb strike added gloss to an already glittering display, with the 18-year-old finding a finish to match his impressive performance after meeting a cross from substitute Alvaro Morata.

Another substitute, Carlos Soler, made it six after Navas failed to deal with a cross, and Morata rounded off the scoring in injury time after playing a one-two with Olmo.