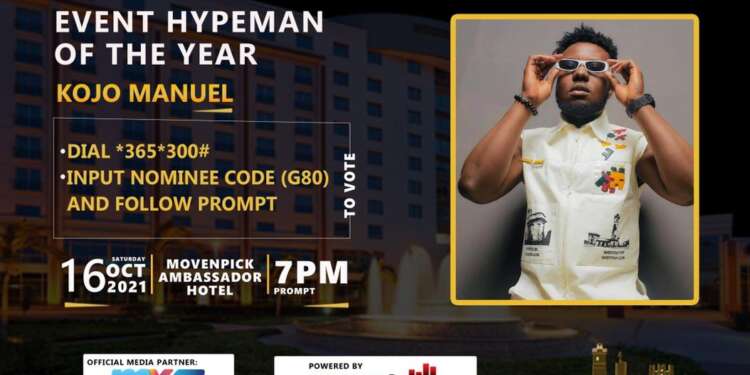 0
SHARES
50
VIEWS
Share on FacebookShare on TwitterShare on Whatsapp

Kojo Manuel over the years has proven to be one of the best Mcees in Ghana. He is currently the resident MC for Frontback Club.

Speaking about his nomination, Kojo Manuel said: “I am grateful for the nomination, it means I am doing something right that is why I keep receiving recognition for my work. To my fans and my listeners, thank you, this nomination is dedicated to you all out there supporting Manny Yo.”

Programmes Manager for Y 107.9FM, Eddy Blay on his part congratulated Kojo Manuel for his nomination.

“All I can say is hard work pays and Manny Yo is an example. Congratulations and go win this,” Eddy Blay said.

Manny Yo was recently crowned as the Best MC at the Ghana DJ Awards 2019. He also won the award for the Best Youth MC & Media Personality at the FAME Awards 2018.

He was nominated twice for Best Club MC Award at the Ghana DJ Awards 2017 & 2018 and also the Jack Daniels Nightlife Awards 2018.

Kojo Manuel previously worked with Echo House as a Digital Marketer and started as an MC for his university hall, Jean Nelson Aka Hall at the University of Ghana in 2014.

As an MC, he has hosted several events such as the AFRIMA Music Village Concert, Ghana Meets Naija, Boiler Room Accra and Afrochella.

The GEA Awards is slated for 16th October 2021 at the Movenpick Ambassador Hotel. Manny Yo is competing in the category with – Berima Sean Bills, Jay TYME, Sheldon the turn up and Abeiku Sarkcess.

Ghanaian Players to watch in the 2021-22 English Premier League

#YouthdayOnY: The youth possess the voice and exposure for growth – Ameyaw Debrah

#YouthdayOnY: The youth possess the voice and exposure for growth – Ameyaw Debrah