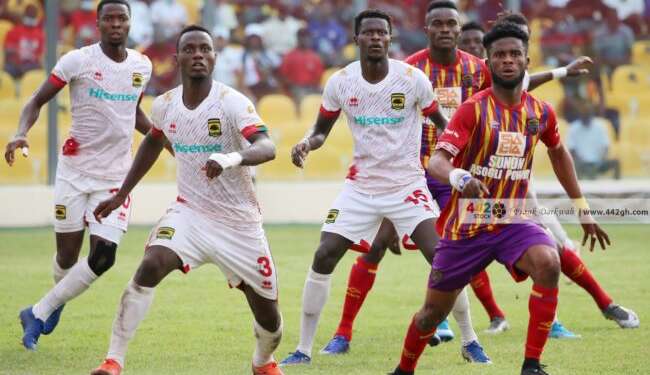 Renowned sports journalist and staunch fan of Hearts of Oak, Felix Roamrk, has indicated that the Phobians need to win in the Super Clash against Asante Kotoko at all cost.

He noted that despite the poor run of form for the GPL defending champions, the Super Clash presents the best opportunity for Samuel Boadu’s charges to reignite their confidence for a league challenge.

“I think for Hearts of Oak it’s a must win for them. they are thrilling the league leaders and they are the defending champions. With inconsistent results in recent times, this is a huge one and what a way to get a win against your bitter rivals. They are playing one of the biggest games that you can ever have in Ghana and Africa when it comes to the elite games. I’m hopeful Hearts will win this particular game. For me this is a must win for them,” he said during the funs conversation on the #YSportsSuperClash twitter space.

Felix Romark also indicated that, for the visitors, Kotoko, it may not be a must win and a loss for them would not adversely have a dent on their season so far, compared to the rainbow club.

“This is actually not a must win for Kotoko. A defeat won’t change anything about hoe they have performed this season but they would also want to get one over their rivals. I’m hoping at the end of the day we will witness a very good game come Sunday,” he said.

In his view, the downgrade in results with the defending champions is not strange but similar to last season’s performances. He reiterated that the club’s sloppy league performances could be attributed to some factors including fatigue from their CAF tournament campaign or the fact that some clubs have found answers to their style.

“For Hearts of Oak, I think that nothing has actually gone wrong. Statistically if you compare what they have achieved in terms of points build-up and goals compared to that of last season, there’s not any big gap between what they have achieved this season. I think that we’re doing the comparison because other clubs have upped their game and Kotoko are playing are playing very well. Clubs this season have really come up and doing well. If you look at Bechem United who are just six points behind league leaders, Kotoko, you can tell most of the clubs have upped their game. Accra Great Olympics are having a fine season and third on the league with 28 points and even Aduana Stars who have lost that home invisibility. Again, there is King Faisal and Medeama. Yes we would say Hearts are not doing well because other teams have improved and we expected a proper defense of the title than they are actually doing.” he indicated.