Epixode narrates epic dream he had about Burna Boy’s mother 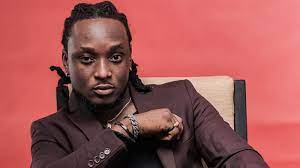 Epixode narrates epic dream he had about Burna Boy’s mother

0
SHARES
52
VIEWS
Share on FacebookShare on TwitterShare on Whatsapp

Ghanaian Reggae/Dancehall act, Epixode, has narrated a dream he had on social media about mother of sensational Nigerian act Burna Boy.

Epixode mentioned that in his dream, he met Grammy award-winning and Nigerian act Burna Boy and his mum, he continued by saying that, the ‘African Giant’s’ mum blessed and assured him as the successor of her son’s music success.

“I had a dream that I met @burnaboy and his mum said I will be the next big thing after burna.”

“THIS DREAM WILL SURELY COME THROUGH 🙏🏾” he added being optimistic and gearing for greatness.

Just as this might sound as good news to fans of the VGMA Awardee, tweets did not spare him and dragged him over his post. Describing his dream as a joke and an insignificant dream and post for that matter.