Maybe you’ve come across this on social media. 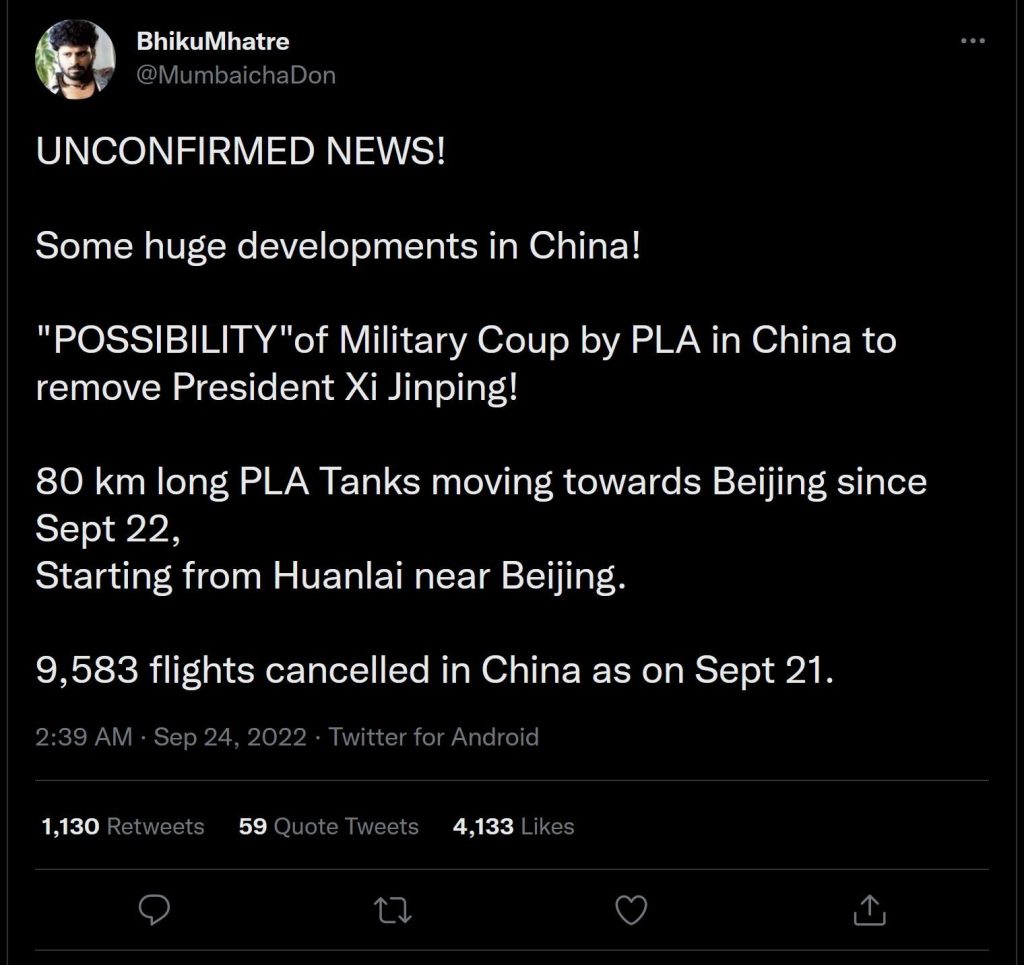 Pretty scary, right? A possible coup in China, tanks moving, and thousands of flights cancelled. It’s got thousands of likes so, a lot of people are agreeing with it. Dig deeper and there are some news organizations saying the exact same thing. Is this actually happening?

The answer is no. This is an example of fake news which has grown exponentially over the years and easy to make on the Internet. Many people and many organizations want to make fake news to either confuse their audience or draw attention to themselves or websites. Knowing how to spot fake news from real news will help you separate the truth from lies and not be fooled.

First, ask yourself this question: who is making this claim? Is it somebody you know? Is it on social media or on the news? Understanding where the news comes from is very important to understanding if it’s real or not.

To do this, the Internet can be used because just as it is easy for lies to spread on it, the truth can be found just as easily.

For example, the author of these tweet has no connection with any news organization. Looking through other tweets making this claim show that they are mostly from Indian news sources or Indian people.

But this creates another question: why would people from India be making fake news about a Chinese coup? Why not America or Nigeria? Another look on the Internet can answer that.

A Google search of “India China” shows information on border clashes between the countries and their leaders avoiding each other at diplomatic meetings. This creates a possible motive. Any news that makes China look weak makes India look strong. Perhaps this is why the fake news of a Chinese coup is coming from India.

This may be one of multiple answers, but it comes to an important step in spotting fake news: critical thinking. Using the information that is in front of you to make judgments on whether this is real news or fake news. Thinking for yourselves rather than letting other people think for you gives you the power to make choices or judgments that can benefit you rather than benefit someone else.

Even without the Internet, questioning where this news comes from and critical thinking can be done. Looking at www.happyghana.com or www.yfmghana.com or any other TV or radio station you trust can answer these questions. Are they talking about it? Are people in your family or group of friends talking about it and where did they hear it from? What is the reputation of those who are talking about it? Do they actually care about the news they spread or are they known for saying stuff for attention?

If all else fail and you are still confused, there is the old saying: time will tell. On September 28th, Chinese state TV showed Xi Jinping visiting an exhibition in Beijing. An arrested man would be out of sight, nor would plans be still in place to confirm him for a third term in power. Lies tend to be easy to tell at first, but become hard to maintain as time goes on. The truth is often the opposite: hard to figure out in the beginning but becomes known over time.

Knowing how to spot fake news has benefits outside of the news. In life, there are people who will come to you with a deceptive business idea or will try to cheat you out of your money. Being able to spot their lies will give you better control of your life and allow you to be happier and more successful than otherwise.

Protests and a 'Mass Exodus' in Russia; Thousands flee Russia to avoid enlistment