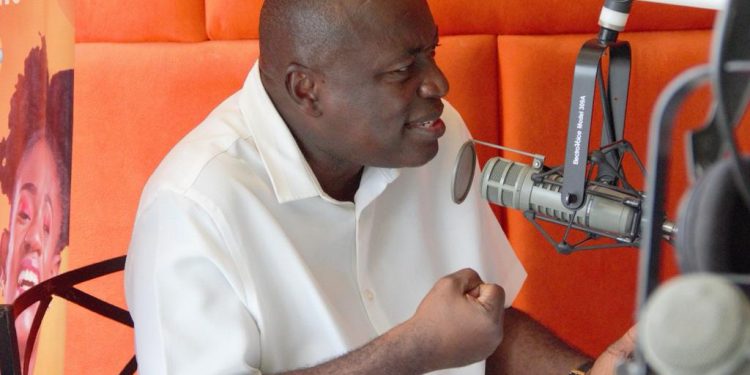 Many Ghanaians would be familiar with the glorious Ing. Kwabena Adjei Agyepong, having served as Press Secretary and spokesperson of former President John Kufuor from 2001 to 2006. He was the youngest of 17 aspirants who contested for the New Patriotic Party’s (NPP) flagbearership to replace former President John Agyekum Kuffuor as presidential candidate for the 2008 Ghanaian General Election.

In 2014, Kwabena Agyepong was voted General Secretary of the NPP. However, he and the party’s chairman at the time, Paul Afoko, faced a lot of resistance in trying to execute their duties and were subsequently suspended from the party he shed his blood and sweat to build.

Following suit on the Y Leaderboard Series, an inspirational program geared for the youth, the renowned engineer and multi-layered personality narrated his childhood days in Kumasi, his educational journey, his youthful exuberance and determination to fight against militarism in the early days of military oppression, and the true story behind his bigoted suspension from the NPP party.

Kwabena Adjei Agyepong was born on Independence Day, March 6, 1962, in Kumasi to the Late Justice Kwadjo Agyei Agyepong and Mrs Margaret Agyepong. Despite belonging to a middle-class family, Kwabena Agyepong regards himself a “hustler” as he enjoyed all the fun and exhibited vibrancy with his friends on the streets and corners of Kumasi.

He had his primary education at Royal International School in Kumasi and continued to Mfanstipim High School, in Cape Coast where he completed his O – level with distinction. He pursued his A-Levels at the same school during which he was made the Library Prefect. He then continued to the University of Science and Technology, in Kumasi, where he graduated with a bachelor’s degree in Civil Engineering in 1986.

Speaking with Rev Erskine, host of the Y107.9FM’s ‘Myd Morning Show’, Kwabena Agyepong disclosed he turned down a chance for British Asylum after the gruesome death of his father. He believes the continuous fight for Ghana’s democracy must take centre stage in the lives of citizens and hence, remained in Ghana to fight militarism to prevent any Ghanaian child from losing his fathers.

“When my father died, the British offered me asylum but I didn’t go. I wanted to be here, sacrifice and be a clot on the conscience of the nation. I got a scholarship to study at the Imperial College and my mother wanted me to come but I didn’t go. I chose to stay and defeat military adventurism in Ghana. I decided to stay to cause change. I made sure I fought for a liberal government where everyone could realise their God given talent.”

Talking of mentors like every young child growing up, Kwabena Agyepong shared that his father was and has always been his mentor. He spoke passionately about the close relationship he had with his father hence, it was no surprise he decided to stay and fight for his father’s legacy.

Recounting some horrific events in the history of the country, he advised Ghanaians to protect the country’s democracy. He admitted the flaws of our democratic system advised the government to remain focused and admonished the youth to have faith in the country.

“A lot of the young people in this country don’t have a clue what the country has been through and that is why we should protect our democracy. When I hear people talk about coups, I want to warn them. You haven’t lived through it. What we have is a system that should work. We may have our shortcomings, disappointments and all that but the best thing is to respect the constitution. In order to keep the peace and democracy in Ghana, the government must not lose focus of the fact that they are in power for the welfare of the ordinary Ghanaian especially the underprivileged,” he said.

Addressing the current issues of the NPP party ahead of its general elections, he reiterated that the NPP has never been a party which cedes authority to persons with influence or money. He urged aspirants to give their best shot for the position, emphasizing the fact that the rules, regulations and values of the NPP make the party unique from all others as democracy is prioritized.

“Go to the delegates with the right messaging. Don’t assume you have the advantage over another by virtue of association because no position will be offered to anyone on a silver platter. The NPP has put in place neither a succession nor coronation plan. There will be no coronation in the NPP. If you want to be a leader of the party then you have to hit the dirt to go and meet delegates. Go there and tell them why they should invest in you as a leader. Those who think they can use forces and coercion to put people in certain positions should know the NPP chooses leaders based on values and by majority decision. We will operate like we have always done in the past and the one who will be elected will gain the support of all factions,” he stressed.

Recounting the events of his suspension from the party, he described it as well-orchestrated by people who were afraid of his toughness and upright decisions when he served as the General Secretary.

Addressing his silence after the suspension for so many years, he said, “I kept quiet not because I accepted it, but because I wanted to protect the sanity of my children and family. The allegations and even the process for my suspension were all mischievous.”

Venturing away from the politics, the multi-layered engineer talking music shared his excitement over the growth of the industry. The ardent music lover was impressed with the recognition of Ghanaian music on the international stage when he attended the World Engineering Convention in Costa Rica in March 2022. He however advised artistes to be financially conscious.

“I still love music and know the music industry is booming in Ghana and I am so happy for the artistes. The artistes are doing so well and the fact that they’re making an impact in the international music scene is remarkable. The world is listening to us and it is fantastic. It is a great time.”

The passionate youth activist advised the youth to inculcate the love of serving the country rather than be motivated by money as he described as vanity. He believes affluence matters less in life but the impact a person creates on people’s lives matters most. He cautioned the youth to not lose sight of friendships and empathy. He encouraged affability among the youth as he believes that is the way to go.

“I want the young people to have a passion for this country, have a passion for what is good. So when I see young people on social media talking about the extent they will go to get money I get worried… Because how much of money do you even need. We shouldn’t be in a hurry, let’s be happy. Money can’t buy contentment, but the mark you leave on people. I have had calls from a lot of people telling me the things I have done for them which I can’t even recall,” he said.

Programmes Manager of Y107.9 FM, Eddy Blay had this to say after the interview, “The Leaderboard series keeps hosting more and more people passionate about the youth. But today I’m struck by the things Kwabena Agyepong has been able to do combing engineering, politics and other stuff. I’ve reaffirmed that nothing is impossible and I believe our cherished listeners and youth have taken cues from this outstanding interview. YFM is honoured to have had a legend like Kwabena Adjei Agyepong come through today and hope to have him another time.”