#AFCONonY: Black Stars to be without Baba Iddrisu against Comoros 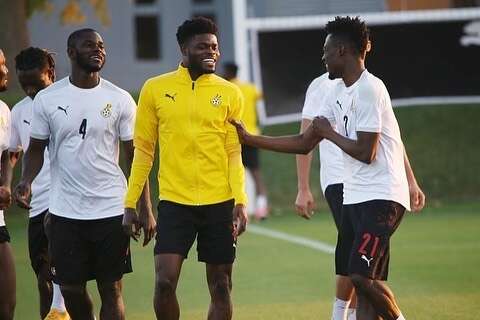 #AFCONonY: Black Stars to be without Baba Iddrisu against Comoros

Ghanaian midfielder, Baba Iddrisu, is set to be absent from the Black Stars starting lineups for the first time in the 2021 Africa Cup of Nations in Cameroon due to injury.

The RCD Mallorca player picked up a hamstring injury in Ghana’s 1-1 game against Gabon on Friday at the Ahmadou Ahidjo Stadium.

‘’The scan results revealed Oedema in his hamstring and so at the moment he can’t play against Comoros on Tuesday,’’ the team’s doctor, Dr. Adam Baba said after returning from the Garoua Military hospital on Monday.

The technical team is however struggling on the fitness of Mubarak Wakaso, making Sheriff Tiraspol’s Edmund Addo the best fit to replace the 25-year-old in midfield. Addo could pair Thomas Partey again after he featured against Gabon as a substitute.

The Black Stars are yet to record their first win in the ongoing AFCON tournament. Ghana would only stand a chance of progressing to the next stage of the competition with a resounding win over Comoros.

Anything but a win will see the Black Stars eliminated from the tournament when they face Comoros at the Roumde Adjia Stadium at 7pm.