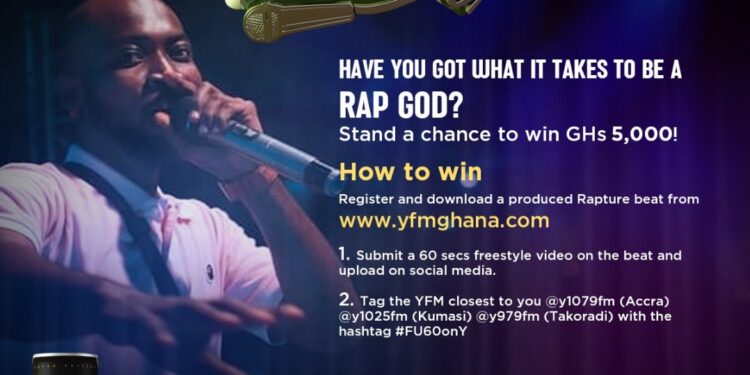 0
SHARES
138
VIEWS
Share on FacebookShare on TwitterShare on Whatsapp

Ghana’s number one urban radio brand, YFM has finally opened slots for registrations of the rap reality show dubbed ‘Rapture’.
Few hours after the registration opened, dozens of ‘hungry’ rappers nationwide have downloaded the ‘Rapture’ beat and dropped some pretty ‘sick’ bars just to secure their place and compete with the best rappers in the country.
The heat for Ghana’s promising rap revival reality show, ‘Rapture’ has become intense as rappers from around the country have shown their eagerness to win the ultimate prize of a Digital Distribution Deal with Crux Global.
Programmes Manager for Y107.9FM, Eddy Blay Jr who is impressed with the submissions so far indicated, “Ghanaian rappers are really dope and the entries we have received so far prove one thing and one thing only, Rapture was introduced at a great period. Now, all the dormant rappers will be resurrected and rap music will once again be Ghana’s ‘ish’.
He advised rappers yet to submit their flows to register and download a produced Rapture beat from www.yfmghana.com and submit a video (1minute) freestyle on the beat and upload on social media using the tag @y1079fm @y1025fm @y979fm and hashtag #FU60Challenge before June 8.
Including the distribution deal, winning rapper will also take home a cash prize of Ghc5,000, live the ultimate dream of any Hip-Hop artiste by working with the dopest and ‘sickest’ sound engineers in the country. Rapture is sponsored by Rich Energy Drink.
Visit www.yfmghana.com for latest news and events updates.
Follow us on Twitter:@y1079fm
Follow us on Instagram: @y1079fm
Like our Facebook page: Facebook.com/Y1079fm
Listen to us on 107.9FM

Bless a Father this Friday and Saturday with Zoe Mama's bread