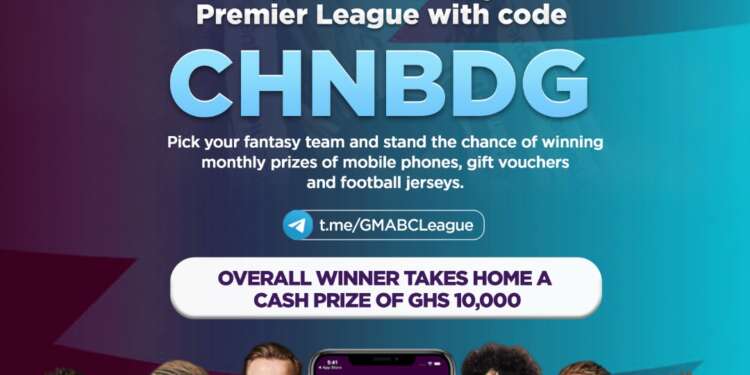 0
SHARES
342
VIEWS
Share on FacebookShare on TwitterShare on Whatsapp

To give sports fans yet another opportunity to fully participate in this year’s English Premier League (EPL) as fantasy managers of the various club teams, in the premiership through the Fantasy League.

It can be recalled that the GMABC Fantasy League was the most talked-about Fantasy League {FPL} during the 2019-2020 Premier League season because of the exciting prize packages and the keen competition between the Managers on the leader board.

With the 2021-2022 Premier League season due to start imminently, Raymond Nyamador has assured managers that there will be lots of amazing prizes to be won.

‘’Last season’s winner didn’t just win GH₵ 10,000, an all-expense-paid trip to a local holiday destination of choice was included in the package.

Apart from the grand prize at the end of the season, a number of participants of the league won monthly prizes after weekly reviews across GMABC (Y 107.9FM- Accra, Y 102.5FM – Kumasi, Y 97.9FM-Takoradi; Happy FM and e.TV Ghana) platforms.

Managers in the league won consolation prizes ranging from mobile phones, laptops, tickets, team jerseys of their choice and a variety of other goodies in our monthly giveaways during the season’’ he said.

The 2020/2021 winner Alexander Minkah like all Managers believes he can with his superb players win the upcoming season.

‘’I won last season and it was fun, the adrenaline rush when you wait for results is real and nothing beats that kind of excitement. I encourage people to sign up for this season, doing what you love and winning money while doing it is a different kind of high. It is real don’t miss out, grab the opportunity.’’

He encouraged beginners to download the Fantasy League App from Play Store or App Store and join the GMABC League with the code CHNBDG.

Raymond who won the 2019/2020 FPL season said he signed up for numerous Fantasy leagues but after winning none of the organisers called him to redeem his prize except for GMABC Fantasy League.

“I can vouch for the credibility of GMABC Fantasy League because when I won they got in touch with me to come and redeem my prize, for the others they refused to pick my calls till date. Join the GMABC FPL and let’s have fun competing. I will win but come and give me tough competition. You can also join the GMABC telegram for tips and insight on how to win,” he said.

The Fantasy League is a virtual game in which participants, who act as coaches, assemble a virtual team of real-life footballers and score points based on those players’ actual statistical performance or their perceived contribution on the field of play. Fantasy Premier League (FPL) Managers have a budget of £100.0 million to spend on a new squad of up to fifteen (15) players.

’Beefing’ is for the rap culture – Lyrical Joe