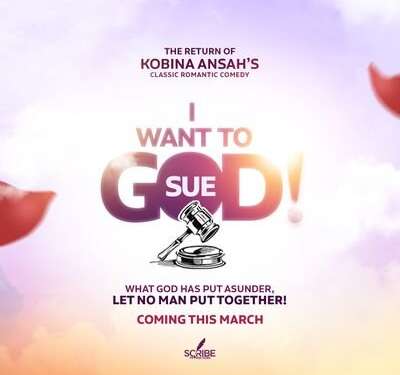 Ghanaian actor, Bernard Kaakoye, has explained the meaning behind the upcoming play ‘I want to sue God’.

He shared the play is a satire and romantic comedy which talks about how humans are quick to blame others when misfortunes come their way.

Going into details on the Late Nite Celebrity Show with Foster Romanus, he said, “It talks about this young gentleman who decided to get married but allows societal pressure get to him. He borrows money for the wedding, gets married and gets one of the biggest surprises of his life. The surprise being his wife turning out to be the opposite of what he knew her to be.”

Bernard mentioned that, due to this, the guy decides to blame whoever came up with the institution of marriage, God.

He highlighted that the play also points out some of the pressures the youth face concerning the pressures of getting married at all costs.

“Also it talks about people going out of their way to do things that are not within their means. But the question here is, can a man sue God?” he asked.

The actor encouraged everyone to come to see the movie on the 5th and 6th of March at the National Theatre as he promises for it to be exciting and full of lessons.

He added that another beautiful part about the play is the fact that it is interspersed with a spoken word which, “gives a brief of whatever is going to happen in between the play.”

Sharing more details about the play, he said, “This play was written and directed by Kobina Ansah, the writer of Emergency Wedding and for this particular play, Tickets are going for 60ghc and the shows will also running from 3 pm and 7 pm each day. You can purchase a ticket at the Silverbird cinema or dial *725# and follow the prompt”.

“Then again, we’ll be streaming live too so if you can’t make it you can just go to our website www.scribeproduction.com and stream” he added.