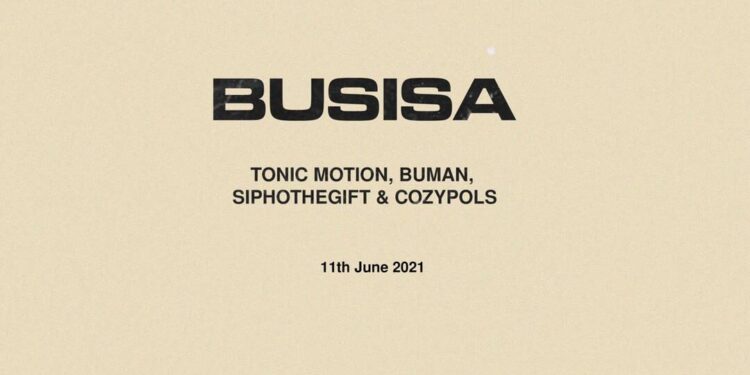 Ghanaian-born British Producer and artist, Dj Kwamzy has announced his return to the limelight, bringing amazing afro-house and amazing vibes to his fans. This return will be signified by the release of the first song off the project called “BUSISA.” The song features Buman, Cozypols, TonicMotion, and SiphoTheGift from South Africa.
The release for “BUSISA” is set for Friday 11th June 2021 on all platforms including a video on YouTube with an exclusive premiere the day before on YFM’s drivetime show, The DrYve with Kojo Manuel.  The idea is to warm up fans before the actual project drops next month.
Busisa is an Afrobeat – Amapiano crossover which talks about hope, love, and togetherness. The original meaning of “BUSISA” – is Bless us/ Blessed, therefore it was pivotal that Kwamzy and his co-artists explain to his fans that even though a lot is going on in the world at this time, “BUSISA” is his official statement to God and the universe to Bless us in hard times.
This song was majorly produced, mixed, and mastered by none other than DJ Kwamzy himself from his home studio.
The magic of the logged drums and the piano accentuates all corners of this song will wow fans and send chills down their spine.
The pre-order link for BUSiSA and the project as a whole can be accessed via the link – http://africori.to/amapianototheworld2
For more information about the project, fans can get updates on kwamzy’s socials (@Djkwamzy on all platforms) as well as get new releases via the link : https:// open.spotify.com/album/5MEHPqIHioyCIBLdvmvN9C?si=geJYre- tQ6OgagcGOWU1rA
For collaborations: artistes and producers alike can reach out to him via :[email protected]