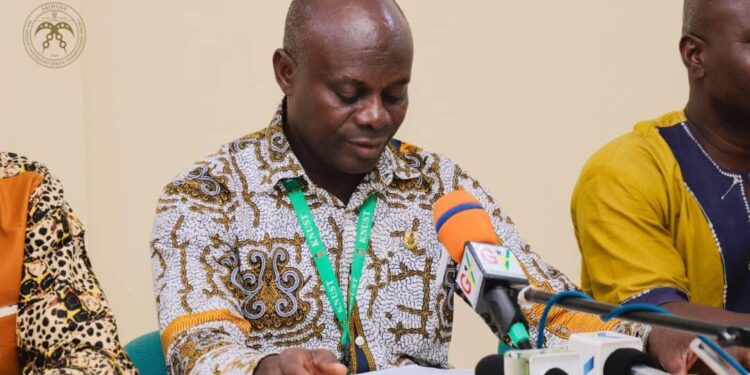 66
SHARES
13
VIEWS
Share on FacebookShare on TwitterShare on Whatsapp

Director of Sports at the Kwame Nkrumah University of Science and Technology (KNUST), Dr Anthony Adiei Tetteh-Opai has revealed, he is yet to be given an appointment letter confirming, he is been selected as one of the physical instructors for the referees in Ghana.
According to Tetteh-Opai, he has been receiving a lot of calls for the past few days seeking confirmation on his latest appointment but remains in the dark as the GFA is yet to get in touch with him.
The Ghana Football Association (GFA), a week ago released a statement to confirm, it has made couple of appointments on the new refereeing structure which will be led by executive council member Frederick Acheampong as chairperson on the newly created Referees Assessors and Classification Panel.
According to the FA, Augustine Fugah, Dr Anthony Adjei Tetteh-Opai and Vivian Agor have been appointed as the physical instructors for the referees of which they are expected to come up with a training theory for referees and also, be responsible for the fitness of referees and their training.
In an exclusive interview with Y 102.5 FM, Tetteh-Opai, who has served as a physical instructor at the Referee Association of Ghana (RAG) since 2008 disclosed, he is in the dark of this latest development as he has not been given any official letter.
“Thank you for this information because so many people have been calling me but as we speak, I have not received any official letter to that effect, so whether it’s true or not, I don’t know”. He revealed.
Tetteh-Opai subtly revealed, he is thinking of declining the appointment when he officially receives a letter because he wish to pave way for others to also come and serve.
“Yes, for my part, since 2014, anytime I tell FIFA am tired, the respond isn’t good and I don’t know, people still see the good things in me but as to this appointment, I have not been told anything.
“For me, I have trained enough younger referees and I think they should also be given the opportunity to work.
“Let’s see what will happen, I will make some calls and find out because I feel, I must give the chance to the younger ones.
“I have trained a lot of people even the ones in the group so they should also be given the opportunity to work and serve this country. He concluded.
The list of physical instructors which will be reviewed and improved continuously shall have a minimum of three instructors in every region according to the Football Association.
By: Stephen-Zando

Alliance For Change Is Not Here To Fight GHAMRO – Trigmatic