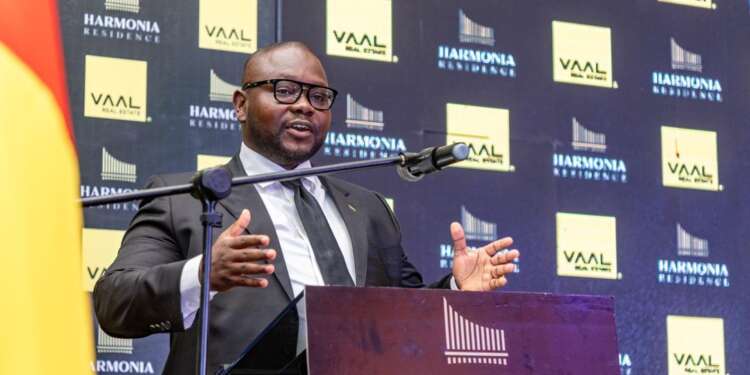 The Minister for Works and Housing, Hon. Francis Asenso-Boakye has called on private developers within the housing sector to embrace the new government affordable housing programme and invest more to bridge the housing deficit which has been prevalent in the country.

The Ministry for Works and Housing has recently developed a new framework that commits it to reduce up to 40% of the construction cost through the provision of land, infrastructural services, tax incentives and exemptions in an effort to ensure that houses developed for sale to the public are not only safe, decent but very affordable to the citizenry.

With majority of Ghanaians requiring some form of support to access housing, Hon Asenso-Boakye said this is the only way through which people can be cushioned against the high cost of acquiring a decent accommodation and positively affect the lives of the larger population.

The Minister for Works and Housing made these known when he launched the Harmonia Residence, a private residential project by VAAL Real Estate in Accra.

As urbanization has made housing one of the major challenges in cities, Hon. Asenso Boakye assured of the government’s preparedness to create the requisite enabling environment for the real estate sector to thrive. He added that the Ministry has, since the passage of the Real Estate Agency Act, 2020 (Act 1047) by Parliament, taken steps to establish an entity that will regulate real estate agency practice, conduct of real estate practitioners, commercial transactions including the sale, purchase, rental and leasing of properties.

“I have had the opportunity to inaugurate the Board of Directors with an Acting Chief Executive to implement and operationalize the provisions in the Act, which is expected to go a long way to plug the avenues in which real estate transactions are used to launder money including the prohibition of the use of cash for real estate transactions’’ Asenso-Boakye stated.

The Works and Housing Minister observed the increasing demand for the development of high-rise and compact properties especially in the cities, in a bid to maximize the limited land space, as well as the emergence of several lateral houses, which have been assessed to be unsustainable. This, the Minister noted, has called for the need to consider the implications for shared ownership of common areas, adding that “the Ministry is committed to getting legislation on condominium properties in place to provide for the establishment, ownership and management of condominiums and unit titles among other things”.

The founder of the Vaal group, Majeed Saad, said VAAL comes with vast expertise in real estate development from Egypt, Turkey, Kenya, and the Middle East and hopes to establish strong footprints in the Ghanaian real estate market. With a dream of becoming one of the biggest, trusted, and well-versed real estate developers in the country, Mr. Saad believes the assurance by the government to create a congenial environment will be the ultimate pivot around which the VAAL ambition would be realized.