It was a beautiful Dre Day 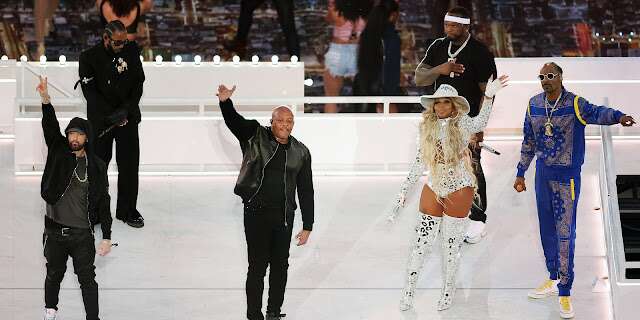 It was a beautiful Dre Day

When I saw the poster for the 2022 Pepsi Super Bowl somewhere last year, the first thing I said to myself was “whoever put this list of artists together must be really really mad.”

Today, while I was watching the 2022 Pepsi Super Bowl LVI Halftime Show, I said to myself again “now this production and set feels just like something Baba Sadiq and his team did last year.  Though it also looks like a ‘Dr. Dre’ celebration’, I swear on the two cents in my pocket that every detail was spot on. At a point, Dre himself was mixing the sound and playing the keys. Oh yeah, I mean that is the legendary Dr. Dre, ‘god’ of good and quality sound, and the one the rest of ‘West Coast’ calls him, ‘the Father of Rap’.

The opening act saw Snoop Dogg and Dre doing a song together. I won’t give you plenty of details, watch the video (link provided below) and get the goosebumps some. All I will say about that performance is after Snoop saluted Dr. Dre, “It is the one and only D.R.E. Dr. Dre you lil bastards!!!” you catch the drift?

Oh!!! let me add that whatever Snoop Dogg has been eating, drinking, and smoking, doctors need to study the ingredients and chemical compositions because it appears the guy is just an immortal. Well enough of Snoop.

50 Cent also took his turn hanging upside-down while he did his ‘In da club’ song which Dr. Dre produced and co-wrote.

Mary J. Blige took it way down with her ‘Family Affair’ song which was also produced by the maestro Dr. Dre. She was really ‘in the spot’ and ‘made it feel alright’ charley!!!!

Kendrick Lamar literally got out of the box to say ‘Nigga!!!, we gon be alright’.

Then came my favorite part when Dr. Dre’s musical firstborn, Marshall Bruce Mathers III, known to the entire world as Eminem, did his usual entry – appeared from the bottom of the stage doing the song that lets you ‘Lose Yourself’ in the music. Like fine wine, Slim Shady keeps getting better with age. Well, I had to ‘Snapback to reality’ cos ‘he’s dope and he knows that’ but ‘the clocks run out’ all too soon.

And like a son will do to a father to honor him in public or in this case to the rest of the world, Eminem just had to bend the knee to greatness. In response to this humble gesture, Dre took charge of a white piano and played one or two of his legendary songs, and like the boss he is, he ended this short piano performance with his ‘Still D.R.E. ‘ classic before teaming up again with Snoop to do the actual  ‘Still D.R.E.’ song. The entire host of artists joined him on stage.

Though Dr. Dre is grown a lot, he is still ahead of his game and he still got love for the streets.