Man married to three women Reveals How He Satisfies Them Equally 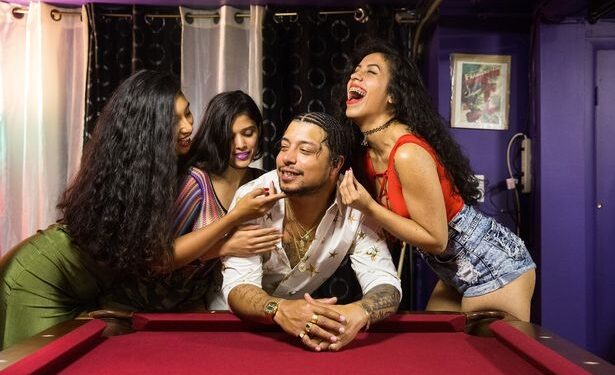 A self-dubbed ‘Lord of the Wives’ who has foursome sex with three women has a special routine to ensure he has sex with each equally.
Paulie, 32, has a special calendar on his iPad which is colour-coded for each wife – then puts on album and makes love to them for the duration of one song each.
When first wife Vanessa Hussle, 31, split up with her husband of three years over his cheating with two other women, Paulie was heartbroken and hoped they’d get back together eventually.
But she never dreamed that she would end up in a relationship with the fashion businessman and both of his TWO new wives – Hazel, 27, and Lady, 25.
Now Paulie, Vanessa, Hazel and Lady happily live together in New Jersey, USA.
The women – who each have matching tattoos of his face between their breasts – all identify as bisexual and the foursome regularly have sex and go on dinner dates together.
While the four gorgeous wives are best friends – they love to go to the gym with each other after work and help raise Paulie’s three children by Vanessa and Lady.
The four of them have all adopted the new surname ‘Hussle’ and Paulie has even had T-shirts made for the women with the words ‘Sister Wives’ and ‘Pauliegamy’ emblazoned on them.
Vanessa said: “When I told Paulie that I wanted to be in a relationship with him and Hazel and Lady, he cried tears of joy.
Mirror.co.uk

Abraham Attah Presented With A Key To Massachusetts By Mayor

Abraham Attah Presented With A Key To Massachusetts By Mayor