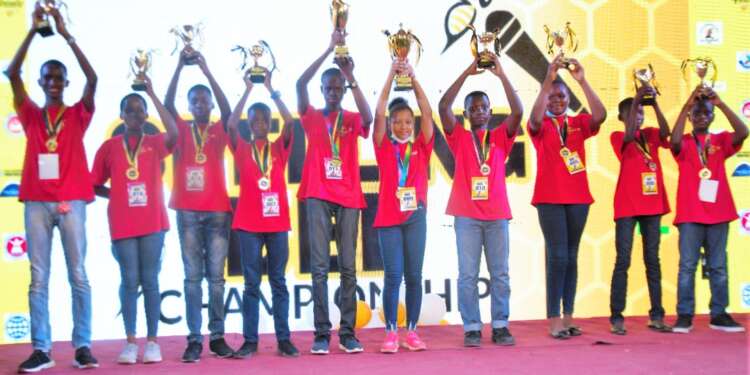 The 2022 National Spelling Bee Championship dubbed “National Hard Spell and Quiz Contest, Ghana,” which was climaxed at the GH Media Institution, saw the University of Cape Coast Basic School dominate the competition in both the primary and junior high levels.

This year’s “The National Hard Spell and Quiz Contest, Ghana” focused on promoting the values and the intellectual intensity of students from the first level education rather than allowing the children go on stage to spell words orally. The competition also served as an educational platform to motivate students learn everything about the word; that is, its origin, synonyms, antonyms, homonyms, idiomatic expressions, proverbs and how to use words correctly in a sentence.

The show which was telecasted live every weekday on Ghana’s illustrious television station, e.TV Ghana saw contestants from various schools battle it out effortlessly as they exhibited their spelling prowess and smartness.

The Chairperson for this year’s Spelling Championship, acknowledged all contestants as well as congratulated the winners for their tremendous display of great knowledge. She further reiterated the significance of child grooming with quotes from the legendary Nelson Mandela.

“All the contestants need to be applauded for such great efforts with the minds. Congratulations as well to the winners for fighting their way through out every step to finally getting a medal. Again, may you never rest until your good is better and your better is best. To parents and guardians, I need not remind you of the value you need to place on your wards as a reminder, from the words of the great Nelson Mandela, ‘Our children are our greatest pleasure, they are our future and those who abuse them tear at the fabric of our society and weaken our nation,’ she said.

After several rounds of spelling some tough words in the competition, Moabindu Japah of the UCC Basic School emerged fifth, Fianyor Veracity from Holy Child came fourth with Keren Aseye third while Kobina Adu-Ampah Mensah and Sophia Gorleku both from the UCC Basic School came out second and first respectively for the primary school category.

Juliana Awo Quist Lawson, National and International Events Manager of the Spelling Bee also indicated that the confidence level of the students grew through the ranks as they exhibited very little or no signs of nervousness. She further revealed that all the 44 contestants will represent Ghana on the intentional level in both Malawi for the Africa competition and in Dubai for the world’s challenge.

“The Spelling Bee was an awesome time for children and parents alike and we are very proud of the winners. For the first time also since 2010 a single school produced two champions in both the primary and the junior high levels all from the UCC School. We had 44 contestants drawn over across the country, with students who have gone through the ranks right from the preliminary stages of the competition to the grande-finale. It was evident the contestants were really prepared after going through five rounds of onstage spelling. The story was different this year in terms of the stage freight and nervousness even when they knew they were live on national television. Confidence level was high and the exposure they have now would definitely improve them. All 44 will have the opportunity to represent Ghana in both the Africa Spelling Bee in Malawi come December and the intercontinental level in Dubai,” she said.

Speaking after the finals, Programmes Manager of e.TV Ghana, Cosby Bikpe, was astonished by the performances from all the final contestants as he described the dominance from UCC Basic and Junior High School as remarkable.

“Today’s final proved the very essence of the National Hard Spell and Quiz Contest, Ghana, to our society and to the nation at large. This has again proved that our young guys are determined and will thrive for greatness. I don’t know what UCC is doing better than the others but next year I expect a more interesting and fierce competition both in the basic and junior levels,” he said.

He also encouraged parents to get their wards to watch this new show especially when they are on vacations, as it is also an avenue for children at home to improve on their spelling skills and vocabulary.